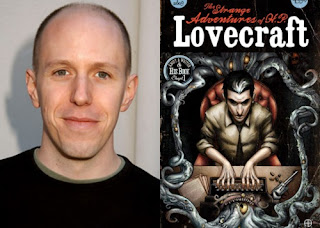 It looks like John August may be working on the screenplay for The Strange Adventures of HP Lovecraft, based on the Image Comics series by Mac Carter. Ron Howard had expressed interest in this project, but has since refocused his efforts on The Dark Tower.

Howard had been working on the script at one point and referred to the comics as “challenging, original, psychologically interesting, and scary in a great way.”

For those of you not aware, Carter is a USC grad and is new to the industry. His series put a reluctant Lovecraft into the mix of the scenarios featured in his own pioneering pulp fiction (Nicholas Meyer did this with HG Wells in Time After Time), facing down the incomprehensible cosmic horrors of an indifferent universe like a 1930s, American Arthur Dent.

August has a long history of working with Tim Burton. He wrote Big Fish, Charlie and the Chocolate Factory, Corpse Bride, Frankenweenie and Monsterpocalypse. seems like he’d be on the right wavelength for the job. He’s no stranger to comics either, taking a shot at a screenplay for the projected Preacher movie.

There is currently no director onboard and no start date yet, so expect it to be a while before this one heads into production. At least we have Guillermo Del Toro‘s At the Mountains of Madness to look forward to.

August sounds like a perfect person to work on adapting this project. I love his work with Burton and am excited to see where this project goes. If you have not seen Time After Time, I highly recommend it.  Last I remember it was available on instant Netflix.

Listen to Lykke Li's Wounded Rhymes before you buy it!