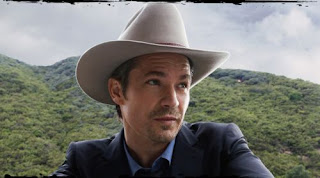 Here are three new behind-the-scenes clips from the second season of Justified on FX!

Here’s some details about the show:


Developed by Graham Yost (Boomtown, Speed) and starring Timothy Olyphant (Damages, Deadwood),Justified is based on the works of crime novelist Elmore Leonard, including Leonard’s short story Fire in the Hole. Fresh off the epic gun battle that concluded season one, season two of Justified finds Bo Crowder dead, and the Crowder criminal grip on Harlan County broken. Deputy U.S. Marshal Raylan Givens (Olyphant) must now face off against the criminal organizations that are moving to fill the void, and finds himself entangled once again with the mercurial Boyd Crowder (Walton Goggins).

The new season of Justified premieres Wednesday, February 9 at 10PM ET/PT only on FX.