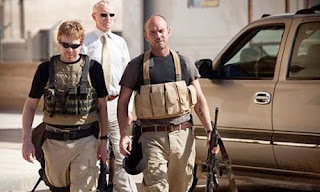 Here is the trailer for Ken Loach‘s new film Route Irish that centers on the Iraq War.

Loach directed 2006’s Irish war drama The Wind That Shakes the Barley which won the Palme d’Or at Cannes.

He has worked once again with his regular writing collaborator Paul Laverty to tell the story of a British soldier-turned-security contractor in Iraq who rejects the official explanation of his friend’s death and sets out to discover the truth.
The film premiered as a last minute addition at the 2010 Cannes Film Festival and received mediocre reviews. Despite critic’s feelings that Route Irish is not one of his better films, I think it looks pretty intense and one I will enjoy.
Synopsis:

Route Irish is a fast-paced conspiracy thriller that delivers a fresh insight into the moral and political corruption at play in Iraq. As well as exploring the abuses perpetrated by private security firms on the ground in Iraq, Loach and screenwriter Paul Laverty (Looking for Eric, The Wind That Shakes the Barley) examine the effects of combat on security contractors — the new “soldiers” of modern warfare – who witness the horrors of combat and are subject to post-combat stress yet receive no support from the state upon return home. Fergus (Mark Womack) returns to his native Liverpool for the funeral of his childhood friend Frankie (John Bishop), a fellow private security contractor who has been killed on Route Irish, the deadly and now infamous stretch of road between Baghdad airport and the Green Zone. Refusing to accept the official account of his best friend’s death, Fergus launches his own investigation, fuelled by the discovery of a cell phone on which Frankie had recorded the shooting of an innocent Iraqi family just days before his own death. As his investigation ramps up — via frequent skype conversations with former security colleagues in Iraq and his interrogation of security firm officials in the UK — Fergus soon draws the heat of those he is investigating and a once dirty foreign war is transferred to the streets of Liverpool and pursued on home turf.

Watch the trailer below, or at The Guardian.
Route Irish hits UK theaters on March 18. There is not a US theatrical release set, but it will debut on Video-on-Demand the same day it’s released in theaters in the UK.