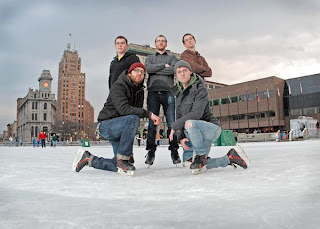 Celebrating its tenth anniversary of raising funds and awareness to assorted non-profit organizations, Sub City (Hopeless Records’ non-profit organization which has raised more than two million dollars for charity), is pleased to announce the 2011 edition of Take Action Tour.
This year’s much-lauded beneficiary is SEX, ETC., theTeen-to-Teen Sexuality Education Project of Answer, a national organization dedicated to providing and promoting comprehensive sexuality education to young people and the adults who teach them. “Sex is a hot topic amongst Take Action bands and fans but rarely communicated in a honest and accurate way,” says Louis Posen, Hopeless Records president. “Either don’t do it or do it right!”


Presented by Hot Topic, the tour will feature celebrated indie rock headliners SILVERSTEIN and BAYSIDE, along with POLAR BEAR CLUB, THE SWELLERS and TEXAS IN JULY.


Kicking off at Boston’s Paradise Rock Club on April 22nd, the annual nationwide charity tour will circle the US, presenting the best bands in music today while raising funds and awareness for Sex, Etc. and the concept that we can all play a part in making a positive impact in the world. Ten percent of the cost of each ticket sold is donated to Sex, Etc. and Sub City 501c3 non-profits. Pre-sale tickets go on sale today at: https://tixx1.artistarena.com/takeactiontour.


Here is what Silverstein vocalist Shae Told had to say about the tour:

“Growing up, every local show we played was a charity show. It was an important part of the scene that we were doing what we loved and more importantly helping others. To step back into that and work with our label to give back, it feels really great. We were a part of Take Action Tour in 2006, and when we had the opportunity to co-headline the tour this year, we jumped at the chance. We couldn’t be more proud to be leading the charge this year with our best friends, Bayside.”

“We’re really excited to be part of Take Action Tour because we’ve never been on a tour where part of the proceeds is going to charity which is great. We’re also super excited to be heading out on the road with some friends that we haven’t played with in years!”

“We were honored to have been contacted by Take Action Tour’s record label, Hopeless Records, which was looking for a non-profit organization to be a part of the 2011 tour,” explains Answer’s Executive Director Elizabeth Schroeder, Ed. D, M.S.W. “It’s amazing that both the company and the artists they represent have been willing over the years to help educate young people about what organizations around the country are doing to serve others. We’re very grateful that Answer has been chosen to be a part of this year’s tour.”


As the teen-focused program of Answer, the award-winning national organization based at NJ’s Rutgers University, Sex, Etc.’s mission is to improve teen sexual health information and resources across the country. “Our organization’s tag line, ‘Sex Ed, Honestly,’ reflects our core belief that young people have the right to receive honest, accurate and age-appropriate information about the entire range of topics related to sexuality,” she continues. “For 30 years, we have reached millions of young people, community and school professionals, and parents throughout the United States.”


With an active online community (sexetc.org) and a national magazine of the same name, Sex, Etc. serves as a resource and destination for teens seeking advice and healthy communication on questions about sex, relationships, pregnancy, STDs, contraception, sexual orientation, and more.
Presenting sponsor Hot Topic has worked with Take Action Tour since the tour’s inception in 1999 and their commitment to helping make a positive impact continues to be as strong in 2011 as it has ever been. The music lifestyle mall retailer (hottopic.com) is a natural fit as a presenter, because they demonstrate a passion for music in everything they do. Expect to see the bands from the tour making several special appearances at local Hot Topic locations throughout the tour. Also generously supporting the 2011 tour are Alternative Press, LifeStyles Condoms, Hopeless Records, Wind-Up Records, Bridge Nine Records, Fueled By Ramen and Equal Vision Records.


Burlington, ON’s Silverstein formed in 2000. This creative and busy decade has seen them perform over 1,200 live shows while making countless friends as they’ve sold over 1,000,000 albums. The hard rock quintet recently finished up their successful US and Canadian Winterizer tour and are preparing for the release of their highly anticipated, fifth studio album, Rescue, due out April 26, 2011. The forthcoming debut Hopeless Records full length is already gaining momentum with a spot on Alternative Press’ Most Anticipated Albums of 2011.


Bayside formed in 2000 in Queens, NY. Since debuting ten years ago, the band has released four full length studio albums, three of which debuted onBillboard’s Top 200 chart, and have sold over 300,000 records in the U.S. alone. Bayside has had huge success on the road, playing over 2,000 shows all over the world. Their touring success has led to a devoted, almost cult-like, fan base which is where their “Bayside is a Cult” slogan stems from. Wind-up Records will be releasing the band’s fifth studio recording, and debut for the label, Killing Time, on February 22, 2011.


The 10-track album was produced by the legendary Gil Norton who has worked with an amazing group of artists including Foo Fighters, The Distillers, Jimmy Eat World and The Pixies. The album was included in Alternative Press’ Most Anticipated Albums of 2011 and received four stars from the magazine. Spin gave the album an 8 out of 10, while Maxim raved, “Take one part Weezer tunefulness and one part Nirvana aggression, add a dash of Green Day’s ambition, then shake, serve, rock out.”
The last few years have been exciting ones for Polar Bear Club.


2009 saw the release of their landmark album Chasing Hamburg which was named one of Alternative Press’ Most Anticipated Albums of the year and absolutely lived up to the acclaim. The band went on to tour the world several times over, sharing the stage with the likes of The Gaslight Anthem, Strike Anywhere, Every Time I Die and more, closing out 2010 on the Alternative Press Tour with Bring Me The Horizon. Fast forward to 2011 and Polar Bear Club will kick off the year by recording their yet-to-be-titled third full-length (second for Bridge Nine Records) with Brian McTernan and will debut new songs from the album on Take Action Tour!

The Swellers have proven themselves to be an aggressive and hard-working live act. The group’s Fueled By Ramen debut,Ups And Downsizing, was named one of the best albums of 2009 by both AbsolutePunk and PunkNews. The Flint, MI-based punk rock group has been on the road nearly non-stop over the last four years, gaining fans and support from other bands with their reactive music and tireless work ethic. Since then, the band has toured with the likes of Less Than Jake, Paramore, Motion City Soundtrack, H2O, and Four Year Strong, not to mention festivals including Warped Tour and the Give It A Name and Groezrock festivals in Europe. The Swellers will return to the studio later this month to record their follow-up to Ups And Downsizing.

As soon as the two youngest members walked across the graduation stage this past year, Texas in July charged headfirst into living out their dreams full time, starting with a European headlining tour and numerous tours throughout the US and Canada. Just after completing the Motel 6 Rock Yourself To Sleep Tour with We Came As Romans, For Today, The Word Alive and Woe Is Me, Texas In July will now join Bayside and Silverstein on the 2011 Take Action Tour. The Ephrata, PA-based band has also previously shared the stage with everyone from The Devil Wears Prada and Every Time I Die to August Burns Red and Maylene and the Sons of Disaster. They will release their new album, which was recorded in Hadley, MA with producer Zeuss (Hatebreed, Shadows Fall), in Spring 2011 on Equal Vision Records.


About Answer and Sex, Etc.Answer is an award-winning national organization based at Rutgers University that is dedicated to providing and promoting comprehensive sexuality education to young people and the adults who teach them. Its ongoing programs include a national Teen-to-Teen Sexuality Education Project, which reaches millions of teens each year with teen-written sexual health information through the Sex, Etc. Magazine and website, Sexetc.org; and a national Sexuality Education Training Initiative, which provides training, resources and technical assistance to more than 5,000 educational professionals per year. To learn more about Answer, log on to https://answer.rutgers.edu.
About Hopeless Records and Sub City:
Founded in 1993, Hopeless Records is a Southern California independent record label home to breakout artists All Time Low, There For Tomorrow, Anarbor, We Are The In Crowd, The Wonder Years and many more. Throughout its 17 year history, Hopeless Records has released more than 150 albums and launched the careers of Avenged Sevenfold, Thrice, and many other notable artists. In 1999, Hopeless Records formally started supporting non-profit organizations under the Sub City banner with charitable albums, tours, and events. Now itself a registered 501c3 non-profit organization, Sub City continues the mission of connecting bands, fans and the causes they are passionate about.  Sub City has raised more than two million dollars for over 50 non-profit organizations.
About Hot Topic:
Hot Topic, Inc. is a mall and web-based specialty retailer operating the Hot Topic concept, as well as the e-space music discovery concept, ShockHound. Hot Topic offers music/pop culture-licensed and music/pop culture-influenced apparel, accessories, music and gift items for young men and women principally between the ages of 12 and 22. ShockHound (www.shockhound.com) is a one-stop, genre-spanning music website where people of all ages can purchase MP3s and music merchandise, share their music interests, and read music news and editorial content. As of December 10, 2009, the company operated 681 Hot Topic stores in all 50 states and Puerto Rico and Internet stores www.hottopic.com andwww.shockhound.com.