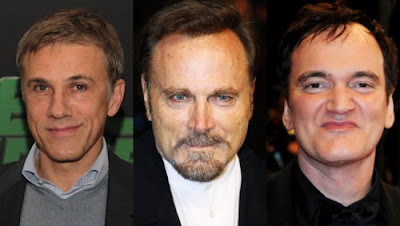 UPDATED: It’s reported that Quentin Tarantino may actually be making that Spaghetti Western that he’s been planning for years. According to BadAssDigest Christoph Waltz is set to star in the film!
Actor Franco Nero spoke during the Los Angeles Italia festival where his latest effort, Pasquale Squitieri‘s FATHER made its world premiere. The actor announced that his next project is a spaghetti western boasting some intriguing names including Tarantino who is a huge fan of the genre.

Nero made the following statement:

“The film will be called The Angel, The Bad And The Wise and is a tribute to Sergio Leone. It’s a movie that contains humor, lots of action, but also a great plot. We have already been signed by a dozen people who will be part of project. Among the filmmakers involved include Quentin Tarantino , Keith Carradine, Treat Williams, fifteen people in all Americans who want to do this movie and so we are trying to produce it outside of Italy.”

As you can expect, details are very slim on the film since it is still in the early stages. It is not known who is directing the film. I remember that Tarantino expressed a desire to take on a Western while doing press for INGLORIOUS BASTERDS. As for now it’s not known to what extent Tarantino will be involved in the project.
More news can be expected on this story as it develops. Despite no formal confirmation, this is some very exciting news for me. What are your thoughts?