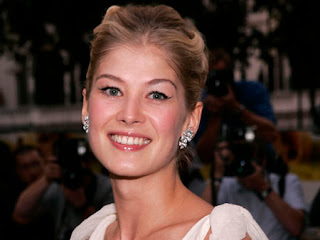 Rosamund Pike has been cast in the sequel to Clash of the Titans to be directed by Jonathan Liebsman. She joins a cast that includes, Edgar Ramirez, Toby Kebbell, Gemma Arterton and Sam Worthington. Liam Neeson and Ralph Fiennes will likely be returning.
Deadline reports that Pike will play Andromeda, taking the place of Alexa Davalos who played the role in the first film directed by Louis Leterrier.
The film is scheduled for release on March 30, 2012 and should will be ramping up soon. There is a bunch of buzs for Liebesman’s latest film, Battle: Los Angeles so let’s hope that the Titans sequel surpasses the first film.
I really hated the first one, thank god I did not pay to see it in 3D or I would have been pissed. I am very excited Battle: Los Angeles so I will keep my fingers crossed for this sequel!
What are your thoughts on Pike’s casting?

Famke Janssen to star in HANSEL AND GRETEL: WITCH HUNTERS