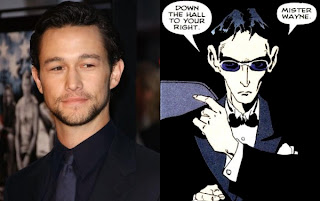 CONFIRMED & UNCONFIRMED – You Make The Call:
Check out the first updated story about Joseph Gordon-Levitt.The next day another report broke stating that he is NOT playing the part. I think it is a fake report and that he is indeed playing Alberto Falcone in the THE DARK KNIGHT RISES.

This rumor comes from an anonymous source at CBM.

This would be a perfect fit for the film and may turn out be true because the first two movies have involved the Falcone crime ring in Gotham.  Alberto Falcone is the son of crime boss Carmine Falcone, played by Tom Wilkinson in Batman Begins.  Falcone also has ties to Selena Kyle aka Catwoman and has played key roles in several of the Batman mini-series comics. Batman has gone in hiding, everybody is looking for him, good guys and bad guys alike.
Do you think this is a rumor of reality?