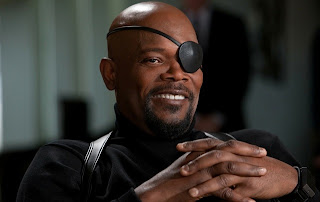 Samuel L. Jackson confirmed that Nick Fury will definitely show up in both Thor and Captain America: The First Avenger in equal measure.
Jackson confirmed Fury’s appearances recently on Late Night with Jimmy Fallon, and here’s what he had to say,

In the next month or so, I have to do one day on Thor, and I gotta do another day on Captain America, and in April we start The Avengers — the big deal with everybody. Thor and Captain America are pretty much done, but I haven’t done my part in them yet. I’m just connective tissue for them to join The Avengers.

It makes sense that he will only appear in a small role in the films, but it is very important for continuity. I am super excited for The Avengers. Jackson also revealed that he will actually have a female companion/sidekick in the film.

I gotta screen test like five actresses on Friday. They have this new character that’s my sidekick or something, that’s with me all the time.

Who do you think his Sidekick will end up being? Share your thoughts below after watching the video:

DUM DUM GIRLS - HE GETS ME HIGH Download & Tour Dates