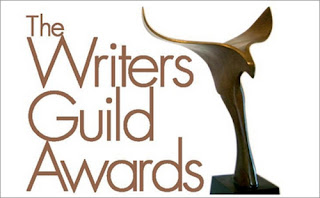 The 2011 Writer’s Guild Awards were handed out tonight. The Social Network and Inception were among the winners during simultaneous ceremonies in New York and Los Angeles.

Don’t get too excited, because you may recall that Oscar nominees The King’s Speech, Winter’s Bone, Toy Story 3, and Another Year were disqualified. I wonder which film’s would have won if they had made the cut?
Here are the winners from the film categories below:
Original Screenplay
Inception
Written by Christopher Nolan; Warner Bros.
Adapted Screenplay
The Social Network
Screenplay by Aaron Sorkin; Based on the book The Accidental Billionaires by Ben Mezrich; Sony Pictures
Documentary Screenplay
Inside Job
Produced, Written and Directed by Charles Ferguson; Co-written by Chad Beck, Adam Bolt; Sony Pictures Classics

7 Films That Will Make You Cry (And Kill Bacteria)