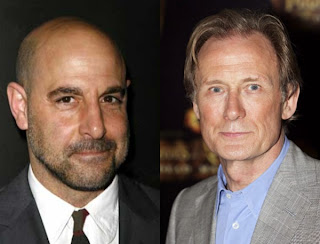 Jack the Giant Killer has just landed some some A-list stars. Academy Award nominee Stanley Tucciand Bill Nighy will star in director Bryan Singer‘s take on the “Jack and the Beanstalk” lore.
Tucci stars as Roderick, the king’s adviser and villain of the story. His character has plans of taking over Cloister. Nighy will play a two-headed giant named Fallon who is the leader of the giants. The other half will be played by John Kassir.
The title role has yet to be announced, but it’s been rumored that Aaron Johnson (Kick-Ass, Nowhere Boy) was at the top of Singer’s list.
The story revolves around a long-standing peace between humans and giants is threatened when a young farmer tries to rescue a princess who has been kidnapped and taken to the giants’ kingdom. Mark Bomback, Darren Lemke and Christopher McQuarrie are writing the script.
The film will be produced by David Dobkin and Neal H. Moritz for New Line, Legendary and Warner Bros. and is scheduled to shooting in London in March.
This will be the second time that Tucci has starred as a bad guy. He was nominated for an Academy Award for 2009 performance as the killer in The Lovely Bones.
What are your thoughts of this casting news?
Source: TheWrap

BACK TO THE FUTURE user created levels in LITTLE BIG PLANET