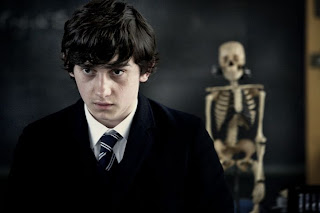 Here is the first trailer for Richard Ayoade‘s Submarine courtesy of Optimum Releasing.
Synopsis:
Meet Oliver Tate, a precocious 15-year-old whose worldview is exceedingly clever and largely delusional (he imagines the outpouring of grief that would spread through Wales if he died). Oliver carries a briefcase, doesn’t agree with everything Nietzsche said but concedes that he had some interesting points, peruses the dictionary for new words (fla•gi•tious, adj, wickedly shameful), and suspects his mother of having an affair with their New Age neighbor. But foremost on Oliver’s mind is finding a girlfriend. Enter Jordana Bevan.

The film will be released in the U.K. on March 18th, and in the U.S., via The Weinstein Company later in the year. Check the trailer on Facebook

It features the music of Jacques Brel‘s “Quand On N’A Que L’Amour (Ne Me Quitte Pas).” The itself has original songs by Arctic Monkeys frontman Alex Turner, in addition to a score by Andrew Hewitt. HitFix is reporting that the soundtrack is set to be released by Domino Records for digital download in the U.K. on March 14th, with a U.S. release to follow on an unconfirmed date.

The band’s official site confirms that the 6-track EP, will get a physical release on the same day, on both CD, and 10 (check out the tracklisting below).