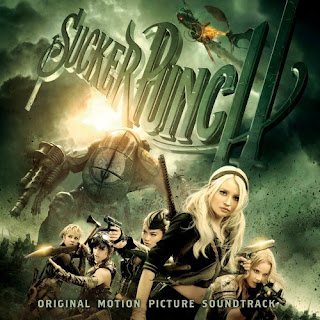 Here are some details on the soundtrack for Zack Snyder’s Sucker Punch.

I am super excited to see this when it arrives in theaters on March 25! Not only does the movie look amazing it is going to sound amazing as well (both sound fx wise and musically).

The disc features music from Queen, Björk, as well as three tracks featuring Emily Browning. The actress lends her voice to a trio of tracks taking on the Eurythmics’ “Sweet Dreams (Are Made of This), The Smiths’ “Asleep” and The Pixies’ “Where Is My Mind?” (with Yoav). Carla Gugino and Oscar Isaac also sing Roxy Music‘s “Love Is the Drug.”
The disc also features a remix of “Army of Me” by Björk and Skunk Anansie, the latter of which also takes on The Stooges’ “Search and Destroy.” Emiliana Torrini delivers her version of Jefferson Airplane‘s “White Rabbit”, Alison Mosshart (Dead Weather) andCarla Azar (Autolux) team up to tackle The Beatles’ “Tomorrow Never Knows,” while Queen get “I Want It All” and “We Will Rock You” mashed up.
The soundtrack will be released on March 22nd, a few days before the film hits on March 25th. Full tracklist below. [Spinner]
Sucker Punch Soundtrack Tracklist
1. Sweet Dreams (Are Made of This)—Emily Browning
2. Army Of Me (Sucker Punch Remix)—Björk featuring Skunk Anansie
3. White Rabbit—Emiliana Torrini
4. I Want It All/We Will Rock You Mash-Up—Queen w/ Armageddon Aka Geddy
5. Search and Destroy—Skunk Anansie
6. Tomorrow Never Knows—Alison Mosshart and Carla Azar
7. Where Is My Mind?—Yoav featuring Emily Browning
8. Asleep—Emily Browning
9. Love Is the Drug—Carla Gugino and Oscar Isaac
Source: The Playlist