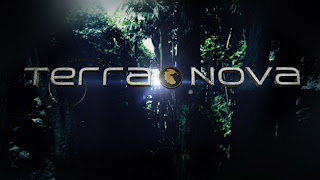 In addition to some awesome new movie trailers, the Super Bowl gave us our first peek at the new sci-fi series, Terra Nova, being produced by Steven Spielberg.
It looks like a mixture of  Lost, Avatar and Jurassic Park. I think it looks pretty cool, the production values are stellar. Check it out for yourself and share your thoughts!

Official Plot Synopsis:
TERRA NOVA follows an ordinary family on an incredible journey back in time to prehistoric Earth as a small part of a daring experiment to save the human race. In the year 2149, the world is dying. The planet is overdeveloped and overcrowded, with the majority of plant and animal life extinct. The future of mankind is in doubt, and its only hope for survival is in the distant past.
When scientists at the FERMI Particle Accelerator unexpectedly discovered a fracture in time that made it possible to construct a portal into primeval history, the bold notion was born to resettle humanity in the past – a second chance to rebuild civilization and get it right this time.
The series centers on the Shannon family as they join the Tenth Pilgrimage of settlers to Terra Nova, the first colony established in this beautiful yet forbidding land. JIM SHANNON (Jason O’Mara), a devoted father with a checkered past, guides his family through this new world of limitless beauty, mystery and terror. Jim’s wife, ELISABETH SHANNON (Shelley Conn), is a trauma surgeon and the newest addition to TERRA NOVA’s medical team. JOSH SHANNON (Landon Liboiron) is their 17-year-old son who is angry to leave life as he knows it behind; upon arriving at the settlement, he finds himself instantly drawn to the beautiful and rule-breaking SKYE (Allison Miller). MADDY SHANNON (Naomi Scott), Josh’s endearingly awkward 15-year-old sister, hopes TERRA NOVA will give her a new chance to reinvent herself. Although Elisabeth’s medical training secured the family a spot on the pilgrimage, a secret involving their five-year-old daughter, ZOE (Alana Mansour), soon endangers their place in this utopia.
Upon the Shannon’s arrival, they are introduced to COMMANDER NATHANIEL TAYLOR (Stephen Lang), the charismatic and heroic first pioneer and leader of the settlement. Taylor, along with his right-hand man, GUZMAN (Mido Hamada), warn the travelers that while Terra Nova is a place of new opportunities and fresh beginnings, all is not as idyllic as it initially appears. Along with blue skies, towering waterfalls and lush vegetation, the surrounding terrain is teeming with danger – and not just of the man-eating dinosaur variety. There is also a splinter colony of renegades led by the battle-hardened MIRA (Christine Adams), who is vehemently opposed to Taylor and his leadership.
Even more threatening than what lies outside the protective walls of the colony is the chilling possibility that something sinister is happening inside Terra Nova. The Shannons will come to suspect that not everyone on this mission has the same idea of how to best save mankind; in fact, there may be forces intent on destroying this new world before it even begins.