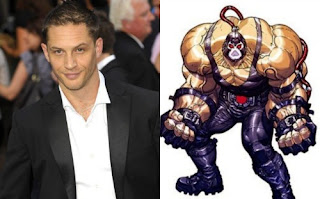 Tom Hardy appeared on Britain’s, Alan Carr: Chatty Man, where he talked about his role as Bane in The Dark Knight Rises.

Here is the excerpts from CBM:

“Have you seen the Joel Shumacher Batman and Robin? Doesn’t look very menacing does he?” [Laughs]

When asked if he would wear a mask, he paused for a few seconds and finally replied with this joke:

Don’t worry, Bane will not look anything like the past films. Christopher Nolan has his own plans for how the character will be portrayed according to Hardy:

“Chris Nolan will revisit the character so I wouldn’t go by that at all.”

The Dark Knight Rises will be released on July 20, 2012. What are your thoughts on this news?