Trailer for The Black Key’s HOWLIN FOR YOU

Here is a sweet grindhouse style short film/trailer/music video called Howlin for You, inspired by the song of the same name by The Black Keys.  The short was directed and written by writer/director Chris Marrs Piliero.

This is so cool I would love to see if adapted into a feature film.
Here’s the Synopsis:
Alexa Wolff, a sexy assassin with a troubled past, unknowingly falls in love with the man who killed her father. He is not her first love, though. Two other men came before. But they would not have her. Now, all grown up with an appetite for revenge, Alexa’s leaving a trail of bloody corpses and broken hearts in her wake.
Click on the image below to watch the video and tell us what you think! 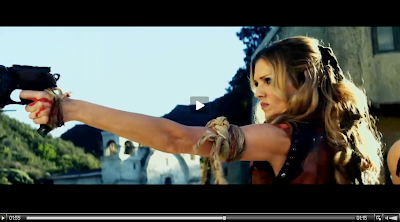 Trailer for The Black Key’s HOWLIN FOR YOU