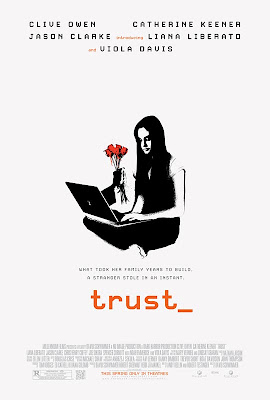 Here is our first look at a film called Trust directed by David Schwimmer (Friends). This is the second film from Schwimmer and his heaviest to date. It stars Clive Owen, Catherine Keener, and Liana Liberato. The story follows a 14-year old girl who forms an online relationship with a boy that turns out to be not what she expected.

A suburban family is torn apart when 14-year-old Annie (Liana Liberato) meets her first boyfriend online. After months of communicating via online chat and phone, Annie discovers her friend is not who he originally claimed to be. Shocked into disbelief, her parents (Clive Owen and Catherine Keener) are shattered by their daughter’s actions and struggle to support her as she comes to terms with what has happened to her once innocent life.

Owen and Keener are two solid actors, but Liberato looks as though the is set for a breakout role here.
Watch the trailer below and share your thoughts!