New Battle: Los Angeles images have landed!
Here are two new images from Battle: Los Angeles courtesy of Empire. I am super excited to see this film, it looks like it could be one of the best alien invasion films that we have seen.
Battle: Los Angeles is directed by Jonathan Liebesman and stars  Michelle Rodriguez, Aaron Eckhart, Bridget Moynahan, Cory Hardrict, Lucas Till, Michael Peña and Ne-Yo.
Synopsis:

When unknown forces put the City of Angels under attack, it’s up to a Marine staff sergeant (Aaron Eckhart) and his new platoon to come to the rescue. As the invasion hits the streets of L.A., the Marines become our first and last line of defense against a highly powerful enemy. 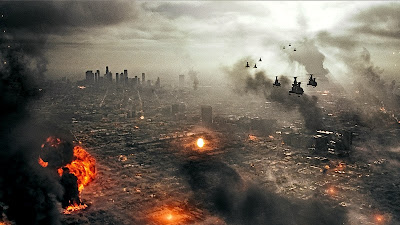