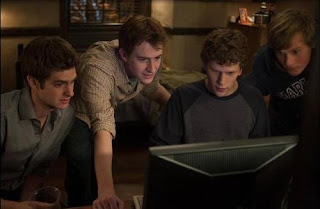 IMDb has just posted the entire 93-minute behind the scenes documentary titled “How Did They Ever Make a Movie of Facebook?” from the supplemental features of recently released The Social Network Blu-ray.

This documentary stands out from most studio-produced documentaries because it gives you an honest look at how the film was made. Don’t worry there are still tons of other amazing featurette’s on the disc so be sure to buy it HERE now if you haven’t already.
Here are the quick links to the four parts of the behind the scenes documentary:
Be sure to check out the extras of the DVD/Blu-ray, they include one titled “Jeff Cronenweth and David Fincher on the Visuals”.