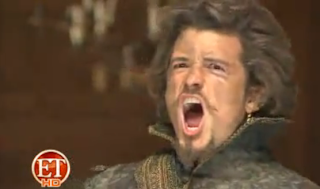 Orlando Bloom may have gone a bit bonkers on the set of his new film, The Three Musketeers.

It looks like his role in this movie is really quite different than anything we’ve seen him do before. He’s playing the Duke of Buckingham, and he’s taking the character to a level of crazy, it’s like hes trying to harness the energy and power of Johnny Depp, to be a little whacky.

The 3D film is being directed by Paul W. S. Anderson and the rest of the cast includes Milla Jovovich, Ray Stevenson, Logan Lerman,  Matthew Macfadyen, Mads Mikkelsen and Christoph Waltz.
Watch this video below and share your thoughts!
Source: ET