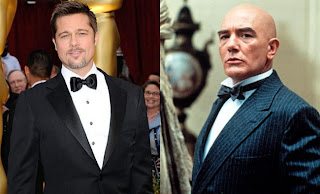 As you are likely aware, Willow Smith is set to star in a remake of Annie with the help of her father Will Smith and Jay-Z who are producing for Sony Pictures.

While walking the red carpet at the preimiere of Never Say Never, Justin Bieber’s new film, the young actress was asked who she’d like to have play the role of Daddy Warbucks in the remake. According to AccessHollywood, Brad Pitt!
When you have an A-list actor father and a super star rapper backing the project, I guess anything is possible. No further details are avalable at this moment.
I personally am not happy about the idea of a remake of Annie with Willow in the role. I also think it’s a joke to even think that Pitt would star in such a role. Stranger things have happened, so we will have to wait and see.
What are your thoughts on the remake and the idea of Pitt starring as Daddy Warbucks?

WHEELER DEALERS Being Produced By Will Smith & Brett Ratner