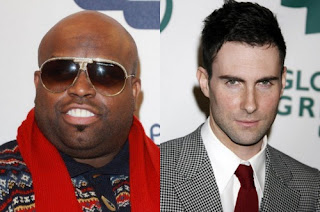 Cee-Lo Green and Adam Levine (Maroon 5) have officially signed on to join NBC/Mark Burnett’s singing competition series The Voice.
Here’s what Burnett had to say:

“I am so happy that Adam Levine and Cee Lo Green have joined the coach panel for The Voice. Aside from being incredible voices, they bring years of experience in the music industry and a really cool vibe that has never been seen before on a music competition series.”

The Voice is “based on a Dutch hit in which contestants audition while judges face the other direction, unable to see the contestants. The judges make their verdicts based on the singer’s vocal talent alone rather than being influenced by the contestant’s physical appearance. After the audition rounds, the judges will coach the contestants.”

One coach seat is still vacant. Christina Aguilera was in talks to join the show at one point, but nothing has been announced. I love Cee-Lo so this is a great choice in my opinion. I am not sold on the need for another musical competition. This sounds very similar to the upcoming American X Factor.
Source: EW

Russell Brand To Star In RENTAGHOST For Warner Bros.