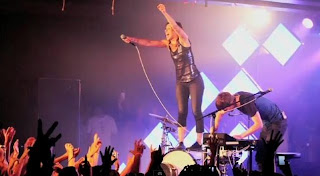 The tour begins after the bands appearance at the mtvU Woodie Awards Party and Their FADER Fort Takeover at SXSW. The tour kicks off at the Sasquatch Festival then moves to Bonnaroo and on to finishing in Boston. Read the official press release below:

New York, NY (March 3rd, 2011) – Be forewarned, Matt and Kim declare war on dull nights out during their official SIDEWALKS headlining US tour, kicking off May 28th at the Sasquatch Music Festival and including Bonnaroo on June 10th. It’s the official tour in support of their third full-length, Sidewalks, out now via FADER Label, and the plan is to tear every playhouse down.

Each show will be a full night of dance debauchery and next day regrets. But Matt & Kim will not be alone;THE THERMALS are coming along too, and DJ AUTOBOT from FLOSSTRADAMUS will be carrying the nonstop dance party through the evening and between bands. Put on some clothes you don’t care about getting dirty, and for fuck’s sake, get there on time.

As a precursor, Matt & Kim head to Austin for SXSW to appear at the mtvU Woodie Awards, Wednesday March 16, where their notorious show has gotten them nominated for a “Live Performance Woodie”. Oh, those awards air live March 16th at 12AM ET/PT on MTV, mtvU, and MTV2. Plan to rage with them on Thursday as they close MTV’s celebration party and on Friday at the FADER Fort.

This past January, the video for the first single, “Cameras”, premiered exclusively on MTV. Despite a practice space brawl of threatening proportions, miraculously, no tour dates were canceled.

Head over to https://www.mattandkimmusic.com/ or www.myspace.com/mattandkim. All the dates, tour information and links are there. Check out the new special tour announcement video below: