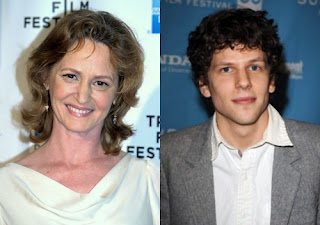 Melissa Leo is set to star with Jesse Eisenberg in a new indie comedy titled PREDISPOSED.
Philip Dorling and Ron Nyswaner (PHILADELPHIA, THE PAINTED VEIL) co-wrote this feature adaptation of the duo’s short film of the same name. It follows a “drug-addled mother and her son during one day where the mother enters rehab and the son interviews for a shot at Juliard.” Tracy Morgan is attached to play Sprinkles, the mother’s drug dealer.
The casting is one that I am already envisioning as I am writing this. What are your thoughts on this news?
Source: Vulture