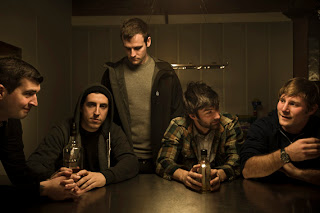 Defeater’s Empty Days & Sleepless Nights has been officially released today. The band will soon embark on a North American & Australian  tour. Also available today is Agnostic Front’s That’s Life 7inch. Keep reading for full details about these releases and to find out where to get tickets for shows!

Here is the official press release:
The day is finally here… Defeater’s double LP opus/masterpiece, Empty Days & Sleepless Nights, is officially available in stores and online today. The press is calling it “absolutely amazing” (Rock Sound) and “brilliantly conceived” (Decoy Music). We think so, too. The band got back last night from their UK/Euro tour with Carpathian, and show reviews sang Defeater’s praise – “there isn’t a soul in the room leaving without their neck hairs raised to the rafters” (Platform UK). This Thursday, Defeater makes their return to the stage in Cambridge, MA at the Middle East for their record release show with support from The Carrier, Disappearer, Dreamtigers and The First Annual. Tickets for the show are still available here:https://www.ticketweb.com/t3/sale/SaleEventDetail?dispatch=loadSelectionData&eventId=3498695&REFID=elink&pl=mideastrestaurant.
Additionally, Defeater will play two showcases in Austin, TX at SXSW before they pack up again and head to Australia in March and April. More North American tour dates will be coming soon, too, so nearly everyone in the world will get to see one of the “top 5 best acts I’ve ever seen (Left Lion UK) and hear new songs off of Empty Days & Sleepless Nights.

Also available today is Agnostic Front’s new 7inch titled That’s Life, which is a precursor to their upcoming album, My Life My Way. The 7inch features two songs- “That’s Life” and “Us Against The World” – and is extremely limited to 2,000 copies worldwide. 1,000 copies of the 7inch will have silk-screened B-sides, while the other 1,000 copies will have hand-etched B-Sides.