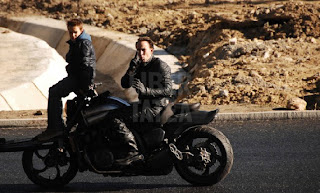 Nicolas Cage has had a bad run of films lately, with the exception of DRIVE ANGRY 3D which I’ve heard good things about. According to an interview that Cage recently did with ScreenCave where he talks about the upcoming GHOST RIDER: SPIRIT OF VENGEANCE.Here is what he had to say about the film:

“It’s really fresh and original. Mark is like a stuntman, camera operator, director all rolled into one. He’s literally risking his life to get shots. On rollerblades, on bungee cords, he’s even patented the rollerblading stuff because no-one else in the business is doing that. And then Brian Taylor is just a walking encyclopedia about movies. We’ve had great conversations about all kinds of films.”

Cage continued to say that the GHOST RIDER sequel will focus on the more supernatural elements of the character.

“It’s not going to be like any other comic book movie you’ve seen. We keep stressing that Ghost Rider is the most supernatural superhero of all and that’s going to really come out in this movie.”