Clue: The Movie finally arrives on Blu-ray for the first time since it’s theatrical release in 1985. I remember seeing the film in theaters while visiting Arizona over the holidays. The reason this theater-going experience sticks with me, is because when I bought my ticket I could choose from one of three different endings. It was opening weekend, and the theater was playing each ending on a different screen!

Jonathan Lynn directs this comedy/murder/mystery that stars Eileen Brennan, Tim Curry, Christopher Lloyd, Martin Mull, Michael McKean, and Madeline Kahn. The story follows “six guests are invited to a strange house and must cooperate with the staff to solve a murder mystery.” 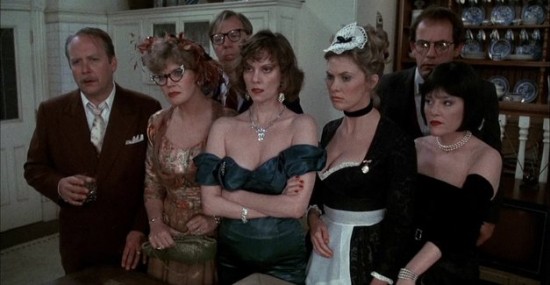 Watching this as a kid, I did not fully grasp how wonderful the cast of character actors truly was. You really can not ask for a better cast than this for a comedy of this type. They are great together on screen and have wonderful comedic timing. The cast is so small that the film is really able to do some cool character development, which is imperative for how the mystery plays out.

As far as Blu-ray quality, Clue: The Movie delivers on two points. The picture quality and sound is even better than what I remember from seeing it in the theater. That is not a surprise since there have been major leaps in theater technology. As far as the special features, the disc was a major let down. How hard would it have been to get some of the cast together to have a cool commentary track. I would have also loved to have seen a documentary about the board game.

Speaking of board games, this is my favorite film based on a board game that has been made so far. Let’s face it, the  Battleship movie is not even anything like the game. Clue: The Movie is actually very similar to the game. If you are looking for a fun film to watch on a Saturday night with a group of friends, then Clue: The Movie is your best bet.

Clue arrives on Blu-ray for the first time August 7.

The 10 Highest-Grossing Sci-Fi Franchises Ever