Pawn arrived on Blu-ray and DVD this week from Anchor Bay. I had actually never heard of Pawn until I received an e-mail notifying me of it’s impending release. I pride myself on staying up to date on most movies, but Pawn has flown under my radar it seems. This is a bit surprising considering the fairly impressive cast for a low-budget film. First-time director, David A. Armstrong, directs this gritty crime thriller that stars Michael Chiklis, Ray Liotta, Forest Whitaker, Common, Sean Faris, Nikki Reed, Stephen Lang, and Marton Csokas.

Imagine you are about to take a bite out of a piece of pie from your favorite diner, only to be startled mid-bite by a group of robbers. That is the scenario that Pawn sets up. The story revolves around a heist at an all-night diner gone awry. It follows two characters – a recently paroled father-to-be (Faris) and a British thug-for-hire (Chiklis). A simple in and out robbery turns into a hostage stand-off when a cop walks in for a cup of coffee during the heist. The story has some shocking twists and turns that you will have to see for yourself. There are restless fingers on every trigger. And one very intense hostage situation is about to take some extremely shocking twists full of Russian mafia, crooked cops and innocent diners.

For a low-budget film the cast is pretty solid. Forrest Whitaker does not have much screen time as I wish he did, but he is good in the scenes that he appears. I have been a fan of his for awhile, but really loved his performance in The Last King of Scotland. Ray Liotta is also horribly under-used in this film. I guess that is what happens when you have a low budget and want to have big name stars in your film. You want them to star, but can only afford them for a set amount of time. I like to think that this is the case, but am not sure. Aside from Common, the cast was solid. Common seemed like a fish out-of-water in this film.

If you noticed from the description above, Chiklis plays a British thug. He is far from British in real-life. I have no idea why they wanted to have his character be a Brit, he could have been from any country. The accent was decent, but I would have rather heard him use his normal voice. I do want to make it clear that I am a big fan of accents, but only when they are needed in the story. His performance is fantastic, and makes up for the bulk of the story. He definitely steals scenes whenever on screen. I would love to see him in another super hero movie that actually does well.

Pawn’s plot is too smart for it’s own good. Despite being a fresh take on a genre thriller, it has too much going on at times. Slow pacing at first gets the film off to an annoyingly slow start. There are too many characters in Pawn, with very few of them actually having any character development. What makes up for these faults is the cool plot twists that keep you guessing.

Picture quality is great, considering that a vast majority of the film takes place at night and with minimal lighting. Shooting digitally helped the transfer of the film to Blu-ray look crisp and clear. The sound quality is not on an equal footing unfortunately. The standard 5.1 stereo track does justice to the music and the background noise.

The special features are non existent on this disc with a solitary feature included. Luckily it is over 23 minutes long and in HD. Pawn: Behind the Scenes takes a look at the plot and characters of the film. The Blu-ray comes with a DVD copy of the film, as is standard practice lately.

If you are a fan of movies like Killing Zoe and Dog Day Afternoon, then you may enjoy Pawn. This is not on the same level as those movies, but it packs a lot of punch because of the cast and plot twists. 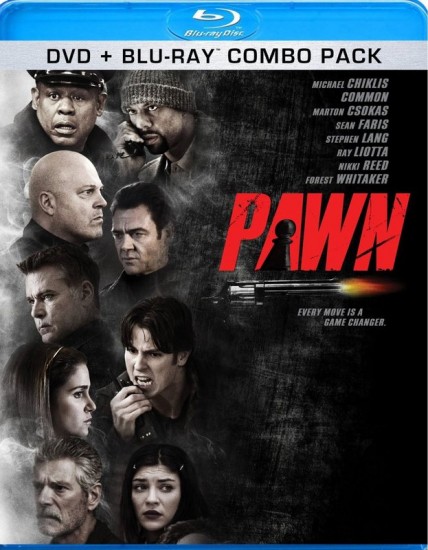