THE PURGE – New Stills and Trailer

A creepy trailer and stills have arrived for The Purge. From the producers of Sinister, the film stars Ethan Hawke and Lena Headey. I have been a fan of Hawke since his role in Explorers as a kid. No one made a Members Only jacket and corduroy pants look cool. Reality Bites and the Before Sunrise movies opposite Julie Delpy make Hawke an one of the most diverse actors working in film. The Purge shows us what it would look like if all crime was legal in America for a 12-hour period. Keep reading to check out the trailer and stills for The Purge.

[box style=”quote”]If on one night every year, you could commit any crime without facing consequences, what would you do? In The Purge, a speculative thriller that follows one family over the course of a single night, four people will be tested to see how far they will go to protect themselves when the vicious outside world breaks into their home. In an America wracked by crime and overcrowded prisons, the government has sanctioned an annual 12-hour period in which any and all criminal activity—including murder—becomes legal. The police can’t be called. Hospitals suspend help. It’s one night when the citizenry regulates itself without thought of punishment. On this night plagued by violence and an epidemic of crime, one family wrestles with the decision of who they will become when a stranger comes knocking. When an intruder breaks into James Sandin’s (Ethan Hawke) gated community during the yearly lockdown, he begins a sequence of events that threatens to tear a family apart. Now, it is up to James, his wife, Mary (Lena Headey), and their kids to make it through the night without turning into the monsters from whom they hide.[/box]

Check out the stills and trailer for The Purge below: 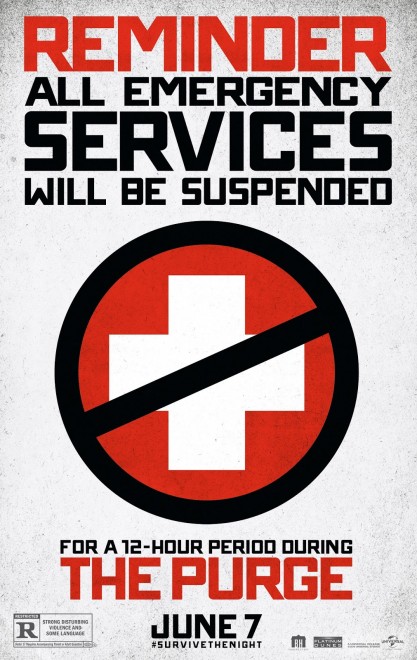 The Purge opens in theaters on June 7

Supercut of Video Games in Movies and TV - Video

THE PURGE – New Stills and Trailer