So far the violent show created by Kurt Sutter has been a roller coaster of a ride, and season five is no exception. The show stars Ron Perlman, Katey Sagal, Kim Coates, Mark Boone, Jr., Charlie Hunnam, and Maggie Siff. Sons of Anarchy is about a rough motorcycle gang that resides in quaint Charming. The town has a love-hate relationship with the Sons. They are basically the black sheep that no one in town wants to talk about,but they are happy when outsiders threaten the tranquility.

Jax may have wanted to be SAMCRO’s new President, but after this season I would be thinking of getting out of the gang after the vicious enemies and betrayal that takes place during season five. Jax is still caught between his mother Gemma and Clay and constantly has to battle for his own identity as President and as a father.

Tara wants to move out of Charming to get away from the violence and try to live a peaceful life. Jax is close to leaving at times this season, but ends up staying and trying to balance his responsibilities. Jax must do whatever it takes to secure the legacy of brotherhood and protect his family — even if it costs him everything.

Enemies are everywhere this season. Police are the least of the Sons’ worries. Clay is trying to exact revenge on Jax, and is willing to do anything he can to take him down. The main villain this season is LOST’s Harold Parrinea, who plays Damon Pope. Jax strikes up a lucrative deal with Pope, but in any business dealings with criminals nothing is 100% safe. Without giving away any spoilers, there is a major death this season. It is someone that has been with the show since the beginning. My only complaint with this death is how quickly it happened. I guess since it was unexpected, that it should be quick. I just felt that the build up to the death was lackluster.

Sons of Anarchy is shot on HD, and thus the AVC encoded 1080p transfer looks fantastic. I love the tones and lighting used on the show, which give it a gritty feel. The sound is equally solid, and gives you the feeling as if you are riding a Hog yourself along with the Son’s. This season does not have as much motorcycle action as in prior seasons, but the lossless 5.1 DTS-HD Master Audio makes them roar to life when on screen.

FX has some awesome shows, and Sons of Anarchy is by far my favorite. I love the show because of the characters and the riveting story line. Sons of Anarchy Season 5 is available on Blu-ray and DVD now 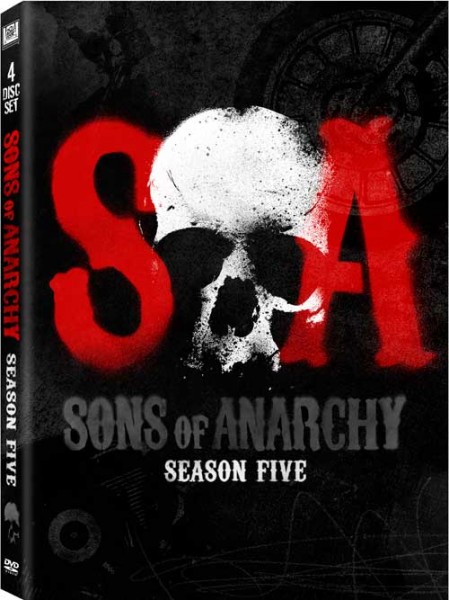