Star Trek Into Darkness is available on Blu-ray, DVD and digital download from Paramount Home Entertainment. Having seen the film on the big screen I was truly looking forward to seeing the Blu-ray version. While I love seeing the great picture quality on my home screen, my main reason for loving Blu-ray releases is their cool special features. Unfortunately, Paramount decided to skrimp on the special features for Star Trek Into Darkness.

There are only a handful of featurettes (listed below) on the Blu-ray. While they are decent to watch, I was hoping for some cool commentary tracks, a documentary about the Star Trek franchise or something, anything really.

The good news is that Star Trek Into Darkness is a fantastic movie. Director J.J. Abrams and writers Roberto Orci, Alex Kurtzman, and Damon Lindelof have successfully taken the classic Star Trek themes and improved upon them for new audiences. Lens flares aside, Into Darkness is a great sequel and even better than the reboot.

The film stars Chris Pine, Zachary Quinto, Zoe Saldana, Anton Yelchon, Alice Eve, Simon Pegg, Bruce Greenwood, Karl Urban, Benedict Cumberbatch, and Peter Weller. Captain Kirk (Pine) is always bending the rules, and the film starts off with him getting removed as Captain of the Starship Enterprise as a result of breaking the rules during a mission on Nibiru. Admiral Pike (Bruce Greenwood) gives Kirk his support again by making him his First Officer on the ship. This means Commander Spock is reassigned. Everything changes after a terrorist attack on Starfleet. Kirk becomes reinstated as Captain and is tasked with searching for the terrorist named John Harrison (Cumberbatch).

For those of you that are fans of William Shatner‘s portrayal of Kirk, myself included, Abrams and the team continue to do a great job of mirroring Shatners portrayal of the character with Pine. I love the fact that Kirk continues to make his own rules to insure the safety of his crew and the success of missions.

Benedict Cumberbatch is completely different as Khan, and that is a good thing. No one can take away Ricardo Montalbán’s take on the character. Cumberbatch puts a new spin on the role, and Abrams and the writers give him so many wonderful lines and make Khan look bad-ass.

Into Darkness looked fantastic on the big screen and looks equally amazing on my home theater. The 1080p, 2.40:1-framed image delivers bright, bold colors in every frame. I love the colorful opening sequence on Nibiru, but the darker sequences in space look great as well. The video quality is spot on as you would expect from a tentpole blockbuster. The sound is superb because of the Dolby TrueHD 7.1 soundtrack, which allows you to hear every element from the booming action sequences to the sweeping musical score. 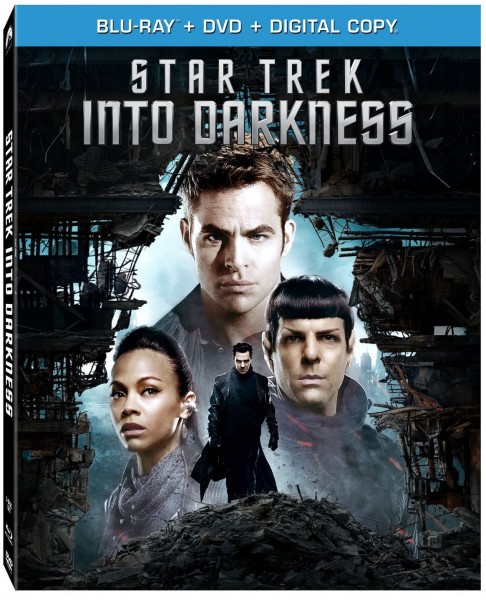