Sons of Anarchy is one of those shows that comes at you full-throttle and just when you think you are going to get hit head on, it swerves the opposite way. Each episode takes twists and turns, making the show must-watch TV. I had the chance to watch Sons of Anarchy season 6, episode one. The episode is titled “Straw” and starts off fast and furious.

The episode description states, “As Jax continues to push the club into more legitimate businesses he can’t escape the sins of SAMCRO’s past.” Jax and his family in jeopardy. Tara has been taken to jail, Jax has framed Clay, and violence looms in every direction. It’s basically another day in Charming.

Jax is torn between his obligations as father and those of the SAMCRO. Tara is keeping the faith while in prison, but others are not fairing as well. Otto is being raped on a daily basis as revenge for killing the nurse. Clay is currently in protective custody, making it hard for a hit to be made on him. Jax has made a deal with Popes men to have Clay killed, and to hand over Tig. Clay may have made a deal with the Feds for his safety. The future does not look well, but he is alive for now.

Meanwhile Tig is still reeling from the loss of his daughter, and is dealing with the fact he’s been passed over for SA. He has no idea that Jax has made a deal that includes his life. SAMCRO is in jeapordy of losing it’s charter if it loses any more men.

Tara has not been in contact with Jax because she doesn’t want Jax to see her in prison. She believes that Jemma is the one who told the cops of her involvement in Otto’s murder of the nurse. Jax confronts ihs mother about threatening Tara, but is interrupted by another crisis.

Tara is approached to rat on Jax for Federal protection and being admitted into Witness Protection. Tara will always be true to Jax, no matter how much life tries to split them apart. Of course she refuses to turn on him, but is concerned for her safety.

Tig is tasked with letting one of the pornographers go, but ends up killing him after he says something horrible about his daughter. Tig is still reeling from the death of his daughter and is upset about being passed over for President of SAMCRO. One of the funniest moments of the episode is when Tig disposes of the body in the ocean by the docks. I found it funny because it was funny to see him dump it as though it was nothing.

Tara’s lawyer comes to find Jax, but Jemma threatens her life. I am not sure if the lawyer is smart to mess with Jemma, especially when she will do anything to protect her grandchildren. 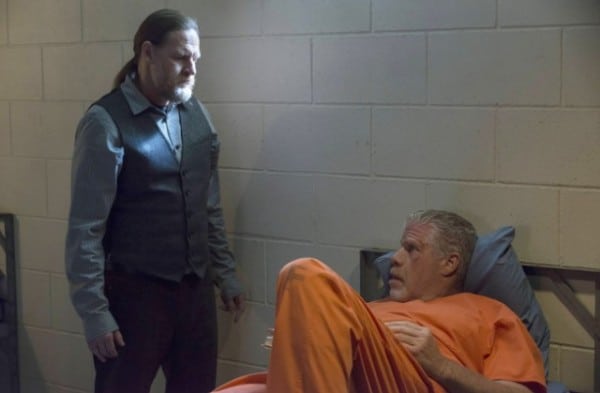 Be sure to check out the series premiere of Sons of Anarchy on FX Tuesday at 10pm/9. Be sure to head online after each episode for Anarchy Afterward. Check back to Screen Invasion for weekly episode recaps.