Behind the Curtain: Interview with Obsidian Dolls Writer/Director Michael Carnick

The creatives behind the feature film, Obsidian Dolls recently debuted four very emotional looking stills from the drama featuring Sammi Rotibi (Quentin Tarantino’s Django Unchained) and John Berchtold (Discovery’s Manhunt). The film’s official synopsis reads: On the eve of the Yom Kippur, an Ethiopian born rabbi, “Nate”, is approached by a troubled young man, “Isaac”. Isaac tells Nate that he wants to end his life, but before that, he wants Nate to recite the Mourner’s Kaddish for him. What transpires will test the limits of faith, compassion, and humanity. To learn more about the film, we spoke with Obsidian Dolls writer/director Michael Carnick (Who’s Driving Doug) about his process for creating the movie. Read here:

Your latest project is titled Obsidian Dolls and stars Sammi Rotibi, whom audiences have seen in films such as Batman v Superman: Dawn of Justice and Djago Unchained. Is there a specific project you saw him in previously, that helped you decide he would be perfect for your film?

Sammi was brought to my attention by Doug Haley, my casting agent. I was familiar with Mr. Rotibi’s work but needed a refresher, so naturally I went to YouTube. I watched a red carpet interview with Sammi and I knew he was right for the role. I told Doug something like, “He’s the one. I need this guy.” Sammi liked the script, and signed on. I am extremely fortunate, either through luck or intuition, because he was truly right for the part. Sammi is an amazing performer and very dedicated to his work. I’m not afraid to admit that much of the film’s success is carried on his shoulders.

Obsidian Dolls revolves around a pretty heavy story of an Ethiopian born rabbi whose faith is being tested by a troubled young man. We read that the film was based on a one act play you wrote while in UC Riverside’s MFA program. Where did the premise for this one act play come from?

The one act play was written almost ten years ago, so it’s kind of hard to remember with crystal recollection. I was interested in telling a story about Jewish identity, but I didn’t want to play the obvious and tell a Holocaust story. Those stories are of course extremely important, but I feel like they’ve been done amazingly well by other talented writers. I watched a documentary about Ethiopian Jews, and I it really captured my imagination and empathy. And it’s a subject not explored very much in the mainstream. 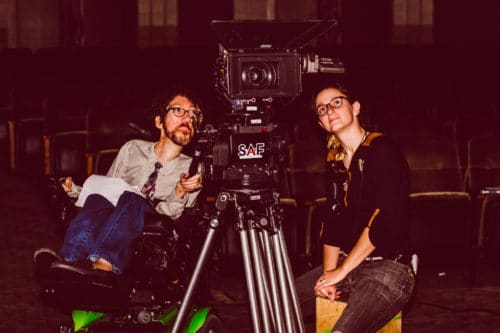 What surprised you most about making Obsidian Dolls?

How far the human body can go without sleep. We shot overnights, from sundown till sunup. It was extremely mentally and physically taxing, but my team was tough and pulled through.

How long did it take you to write Obsidian Dolls?

The film adaptation took about six months or so. The original play was about the same, but there was a ten-year gap in between. Better late than never.

You are both a writer and director. Which position comes more naturally to you?

Compared to writing, directing is still relatively new to me so I feel more comfortable writing, but both roles are interesting, challenging, and fun for different reasons. When you write something, you’re done after you turn in the shooting script. When you direct, you’re not done until you’re dead. I like being both, because I’m greedy.

You have said that it is important for you to show a new perspective in the projects you create. What other sorts of characters are you hoping to portray in future projects that you haven’t yet?

My default perspectives have always been disability and LGBTQ+. But lately I’ve been trying to move beyond the “write what you know” territory. Obsidian Dolls tackles the Ethiopian / Israeli experience, which was something new to me and required a lot of historical and religious research. The LBGTQ+ and disability themes are still there, and probably always will be in the strata of my work to some extent, because those are topics that I care deeply about.

That being said, I have a short film in pre-production that’s a romantic comedy between two octogenarians. It might sound icky to some, but older people have romances too, and like anyone else it can be very sweet and charming. I suppose I’ve always been interested in showing love between people in different ways, from different backgrounds. It’s important, I think, for us to come together as a species and declare that love is love.

You wrote the film, Who’s Driving Doug, which was licensed to Netflix. Can you talk about how you can up with that story?

Who’s Driving Doug was based on a Goldwyn Award grand prize-winning script that I wrote while still an undergrad at UCSD. At that time, in 2005, I was the first undergrad to win the prestigious award. And since it was my first full length screenplay I ever wrote, it was based largely on my own life. Some of it was invented, some of it was based on real events. Buy me a few drinks and I’ll tell you more.

David Michael Conley directed Who’s Driving Doug. What was your collaboration like with him?

David also directed my first short film called Rolling Romance, when I was fresh out of high school. He was recommended to me by a former classmate, Melissa Harkness, who was co-producing the short. Melissa has appeared in almost all of my projects, most prominently in Manny Fantasma. She’s a terrific actress and a great friend.

Likewise, David is also very easy to get along with. We hit it off almost instantly, and we collaborated very closely. He’s a very talented director and probably the nicest guy in the industry. That probably isn’t saying much, but really, he is very kind, respectful, and easy to work with. A treasured rarity in this field.

From Who’s Driving Doug to Manny Fantasma to Obsidian Dolls, how do you feel like you have grown as a filmmaker from each project?

What advice would you have for aspiring filmmakers?

I say the same thing to everyone that asks this – don’t go into filmmaking unless you really feel like you have no other choice. And if you do, treat people with respect. There are a lot of narcissists and sick people in this business, and the media seems to reward these people. But in the independent film world that doesn’t work. Everything is based on connections and loyalty between close knit groups. Be nice, it isn’t hard.

Behind the Curtain: Interview with Obsidian Dolls Writer/Director Michael Carnick