The following review is a guest review written by Christopher Bram 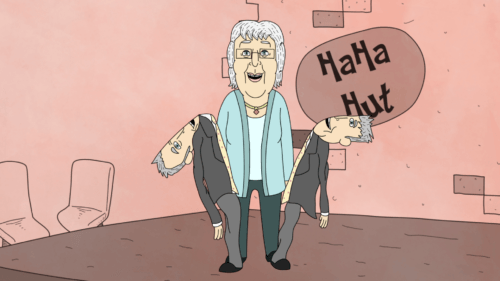 The best stand-up comedy is all about truth-telling. Difficult, complicated truths are often easier to accept when delivered by a gifted comic. Julia Scotti is not your typical comedian. She is an older woman with white hair and a face like a fallen cake. But she has a wonderful truth to share: she spent most of her life as Rick Scotti, a male comic with three marriages and two children. Not until she was fifty did she understand she’d be happier as a woman.

Susan Sandler’s rich and lively documentary, Julia Scotti: Funny That Way, lets Julia tell her own story in a variety of voices, as a comic, a public speaker, a parent talking to her children. Her emotional honesty is breathtaking. She shares truths about the comedy business, the meaning of gender, the challenges of marriage–any kind of marriage–and the fear of death. Sandler deftly illustrates Julia’s stories with home movies, animated cartoons, clips from her stand-up act (as both Julia and Rick), interviews with her son and daughter, and an amazing episode of America’s Got Talent. This surprising, soulful portrait is so well-crafted it flows like water. 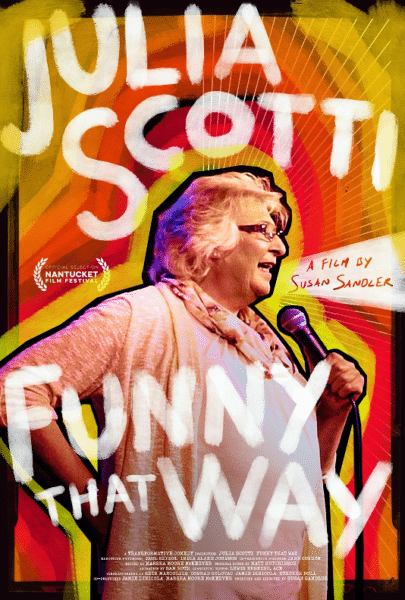 In the comedy boom of the late 1980’s Rick Scotti was a busy guy—working clubs across the country when he came to the deadly realization that nothing felt right. At a time when the words gender dysphoria and gender affirming surgery were rarely heard, Rick’s true awakening at age 47 led to a year of hormonal treatments, surgery, and a new identity as Julia Scotti. And then the doors shut tight. Everyone turned away—former wives, friends, family, comedy world buddies. Most painfully,

Julia was shut out from contact with the people she most deeply loved – her children. She reinvented herself, spent a decade teaching, and then several years ago, stepped on stage and began the journey back to the world she loves. In that same period, her children made contact after 15 years of estrangement. The film tracks Julia’s triumphant comeback, the rough life on the comedy circuit, and the return of her children, as comedy becomes a shared language of identity, healing, and joy.

Funny That Way is now available On Demand and Digital. Choose your preferred viewing platform: https://geni.us/JuliaScottiFilm

The Dude Abides Podcast - Road Trippin With The Dude

Ron Perlman Gives Details About His Role In CONAN THE BARBARIAN