I went into this movie completely blind aside from knowing that Mikkelsen was in it. I’m a fan of his work and Riders of Justice is now on the list of his best films.

Losing someone you love is always difficult, but it’s especially difficult because of the circumstances surrounding the incident. Mikkelsen’s character is very tough and shows no emotion, but that’s because he’s a soldier and has had to bottle up his emotions to stay alive.

I can’t think of many actors who can pull off leading a revenge thriller, but Mikkelsen is bad ass. The supporting cast is perfect. They’re like Geek Squad on crack.

As a fan of technology I consider these three to be ethical hackers. They don’t break into websites to become rich (it’s mostly renewing gym memberships). Without them, the film would be a serious revenge thriller. Because of them, the film was quite humorous and touching.

There’s so many touching moments, which is not what you might expect from a revenge movie. Riders of Justice is NOT your typical revenge film. I think it actually has more drama than action. Audiences will definitely be surprised.

Magnet Releasing will release RIDERS OF JUSTICE in LA, NY, Bay Area, Miami,Orlando, Oklahoma City and Fort Worth theaters on May 14th, 2021. In theaters everywhere and On Demand May 21st, 2021 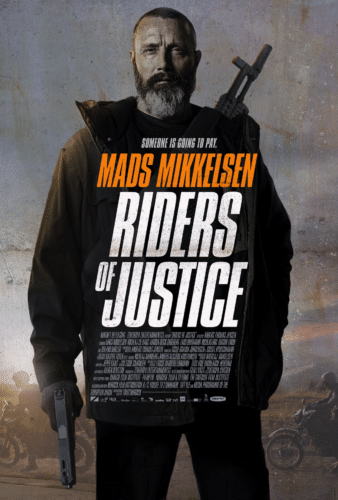 RIDERS OF JUSTICE follows recently-deployed Markus (Mads Mikkelsen), who is forced to return home to care for his teenage daughter after his wife is killed in a tragic train accident. But when a survivor of the wrecked train surfaces claiming foul play, Markus begins to suspect his wife was murdered and embarks on a revenge-fueled mission to find those responsible.

THE GREEN KNIGHT Trailer Is Here