I went into this movie relatively blind, aside from the fact that I had a sense it would be about wax.

Unfortunately, I was very unimpressed with the film itself. I felt that the first portion of the film was excruciatingly long, and without reason.

If there is a major payoff at the end, that’s a slow burn. House of Wax is definitely not one. I felt as though I wanted the characters to die because they were so obnoxious. The slow-moving pace may have been an attempt to develop characters, but I did not think this worked out.

I would consider House of Wax to be slasher-adjacent. The amount of violence and gore would be relatively okay for someone dipping their feet into the horror genre. 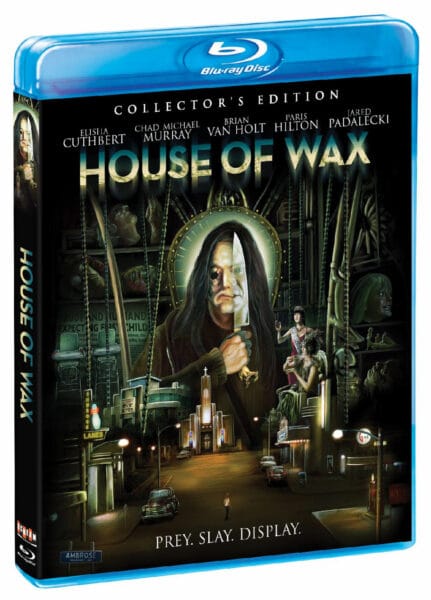 When their car breaks down on a road trip, six college friends are sidetracked into an eerie backwoods town. Curiosity gets the better of them when they are intrigued by its macabre House of Wax. They soon find out that the town is not what it seems, and that they must find their way out before they fall victim to its ghoulishly inventive killers.
As is typical with Scream Factory releases, the special features are like the cherry on top. The list of features is extensive so you’ll definitely get your money’s worth.

Watch the trailer for House of Wax below: