Sexy Furby is by far the most unique film that I’ve seen in a long time.  Sexy Furby had its world premiere at the 25th Annual Fantasia International Film Fest.

This short is a comedy with a slight mix of horror. Many times I found my eyes building out of my head wondering what they had just seen.

The costuming is where it’s at. I’ve always been a believer that clothing can be funny. The moment that you see the lead, you’ll automatically let out a chuckle. That’s exactly what the directors wanted.

Usually I’m not a big fan of movies with heavy narration. Sexy Furby does have a lot of narration, but it’s important in advancing the story. When you only have such a limited amount of time, you have to make the most of everything.

Sexy Furby is a short film about a suicidal girl whose life changes forever when she meets a half Furby/half man in the woods.

The film was written and directed by Nicole Daddona and Adam Shenkman. 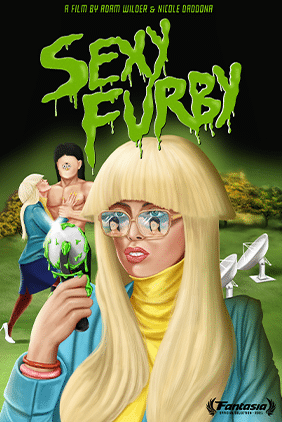