You’ll be afraid to go back … in the streets. Well the Los Angeles streets made to look like St. Louis. The movie supposedly takes place in Missouri yet there’s not any shots of the Arch or the Missouri River.

I love Alligator and it’s cheesy story. What’s not to love about the concept of a baby Alligator being flushed down the toilet and grows frickin huge and begins terrorizing the city of St. Louis.

I’m a fan of Robert Forester in every film I’ve seen of his and Alligator does not disappoint. His no nonsense tough guy is is his niche. He’s amazing in Jackie Brown. I also enjoyed him in Vigilante.

There’s nothing better than Alligator’s 4K release from Scream Factory. I actually think that I like this more than the Halloween and Krampus releases. 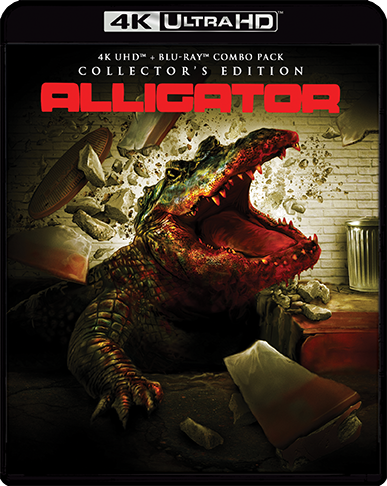 From director Lewis Teague (Cujo) and screenwriter John Sayles (The Howling) comes an unstoppable thriller with bite. A family returning from Florida decides their pet baby alligator is too much to handle and flushes him down the toilet. Meanwhile, Slade Laboratories is conducting secret experiments with animals and disposing of them in the sewer. The alligator, fending for itself, begins to feed on the dead animals, and grows. Now, twelve years later, after several mysterious murders, David Madison (Robert Forster, Jackie Brown) is on the case to find out who … or what … is killing people.