Shooter has arrived in 4K in a stellar looking steelbook from Paramount Pictures.

Their steelbook releases have been great so far. I’m interested in seeing what future releases are on the horizon.

This is one of my favorite Mark Wahlberg action thrillers. He and Michael Peña are great together. However, it’s a little silly that Wahlbergs character, Bobby Lee Swagger, is able to teach Peña’s character to shoot well in a matter of days.

Regardless of this plot hole, I like the film for what it is, a fun and mindless action movie that’s perfect to enjoy with a nice bag of popcorn. In fact, I believe that I did this very thing while watching this in theaters during its original theatrical run.

I love seeing Morgan Freeman and Ned Beatty as the main bad guys. Freeman is great in the Lethal Weapon and Predator franchises.

I’ve had a soft spot for Beatty for years after growing up watching him as Lex Luthor’s inept sidekick.

Kate Mara seems to have dropped off the face of the earth. Unless she’s on some great TV show that I apparently don’t watch.

I’ve been a fan of Elias Koteas since Teenage Mutant Ninja Turtles. He’s a believable baddy in Shooter and definitely gets his in the end. 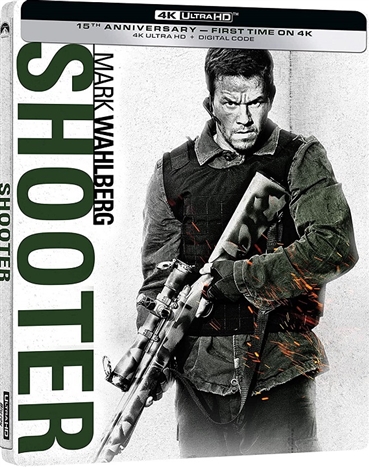 Mark Wahlberg and director Antoine Fuqua (Training Day, Infinite) teamed up for the first time on the intense action thriller SHOOTER.  Wahlberg stars as a respected former Marine sniper who is pressed into service to stop an assassination attempt on the President.  When he’s double-crossed and framed for the attempt, he must prove his innocence while evading every law enforcement agency in the country and a shadowy organization that wants him dead.

Originally released on March 23, 2007, SHOOTER celebrates its 15th anniversary this year and will be available for the first time on 4K Ultra HD in a Limited-Edition Steel Book on March 15, 2022.

Check out the trailer

I recommend checking out Shooter in 4K. The picture and sound quality are exquisite.