I am a fan of Nicolas Winding Refn‘s films, with Bronson and Driver being my favorites. Valhalla Rising was Refn’s most unique works, that is until I watched Only God Forgives. Starring Ryan Gosling, Kristin Scott Thomas, Tom Burke, and Yayaying, Rhatha Phongam, Only God Forgives is a slow, over-stylized revenge thriller.

The story follows Julian (Ryan Gosling), who operates a Bangkok fight club with his brother Billy (Tom Burke). The fight club is actually a front for an illegal drug business. Julian does his best to stay under-the-radar unlike his brother. Billy is killed after he murders a pimp’s daughter. Julian’s crontrolling mother (Kristin Scott Thomas) comes to collect her son’s body and demands that Julian avenge his brother’s death. He is about to kill the pimp, but feels sorry for him because of Billy’s brutal murder of his daughter. This is unacceptable to his mother who hires local thugs to exact revenge, kicking off a string of events that will change the family forever.

Refn employs explosive colors, moody music and goes overboard with slow-motion and long tracking shots. Only God Forgives is not bad, it is just different than his other work aside from stylistically. Instead of dialogue, many scenes use violence and action. Refn uses natural lighting, with many scenes relying on neon and reds to light the scene. The languid character shots are almost like snapshots. It felt like I was watching a slideshow of snapshots during some parts of the film. Only God Forgives is as far from the cookie-cutter films that come out of Hollywood films

The film may look good, but it is hard to follow. The dialogue is sparse in the film, which leaves a lot of the character development to be non-existent. I found it hard to understand the plot at times.In fact, it is difficult to follow on an initial viewing. One thing is for sure, the characters are very unique. Julian and the Cop are like yin and yang, with each remaining calm when using violence to their advantage.The calm blank stares are what add to the eeriness of the film.

The cop is one of the most unique villains I have seen on film. He is judge and jury and delivers his justice with a sword by either killing or maiming those that have sinned. After bouts of extreme violence, one being even more violent than the Drive elevator skull-smashing scene, the cop can be found singing before going home to his family. The singing to me is a way of cleansing his soul of his daily deeds before returning to normalcy. The family dynamic between the mother, Julian and Billy is strange, Frued would have a field day analyzing it.

Only God Forgives has a solid high-definition digital transfer, making it one of Anchor Bay’s best-looking discs. The dark tones and red lighting look fantastic. Featuring a DTS-HD Master Audio 5.1 lossless soundtrack that delivers powerful high and low-end sounds throughout. Below are a list of special features for the Blu-ray: 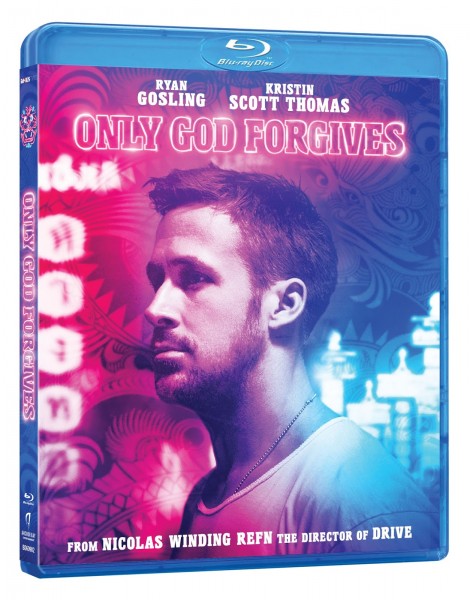 Only God Forgives is available on Blu-ray and DVD now.