Llewyn is pouring his heart and soul during a chilling performance of “Hang Me, Oh Hang Me” to a small but entranced gathering in the infamous Gaslight Cafe before receiving his brutal comeuppance on an unforgiving winter night in Greenwich Village, just one of many insurmountable obstacles he will face over the course of a week to the backdrop of the early sixties’ folk music scene. This portrayal by Oscar Isaac is loosely based on real life folksinger Dave Von Ronk as we see him struggle with guitar in tow as he faces the merciless crossroads alone. After losing the generous Gorfeins’ cat, Davis finds himself knocking in desperation at the door of Jim (Justin Timberlake) and Jean (Carey Mulligan), where he discovers that responsibility must be taken to correct circumstances brought on to vulnerable Jean courtesy of his reckless indulgence. An opportunity to set things right presents itself through a gig set up by Jim to record a novelty song and this sequence delivers

Joel and Ethan Coen’s trademark humor that is underlined by Adam Driver’s enthusiastic back up vocal duties. Davis foolishly gives up royalties to the song as his hunger negates his better judgement and unfortunately this decision will come back to viciously taunt him. Davis isn’t ready to roll over yet as he becomes determined to meet music mogul Bud Grossman (F. Murray Abraham) in Chicago that could potentially be the saving grace for his failing solo record. Along with his feline companion, he hitches a ride with silent beat poet Johnny Five (Garret Hedlund) and the charmingly blunt jazz musician Roland Turner (John Goodman in a scene stealing performance), as their journey undoubtedly leads him to unpredictable destinations and misanthropic outcomes.

Inside Llewyn Davis is an enduring capsule of an era that plot really had nothing to do with and though this approach seems minimal on the surface, the deception lies in the fact that every moment is filled with purpose. From Davis pondering the irony of The Incredible Journey  to the subtle undercurrents that wrap around every musical performance. Bruno Delbonnel’s cinematography proves a worthy replacement for Coens’ regular Roger Deakins as no moment passed where I didn’t feel I was immersed in this period of time. As Llewyn bids “Fare Thee Well” to his enchanted audience and facing the music so to speak of an angry shadowy man, Joel and Ethan Coen once again cement their reputations as maverick filmmakers. Their ability to attract empathy for a man that might not deserve it is unquestionably admirable and their display of minimal yet effective storytelling only proves that narrative doesn’t need to be conventional if handled by the craftsmanship that these brothers clearly possess. 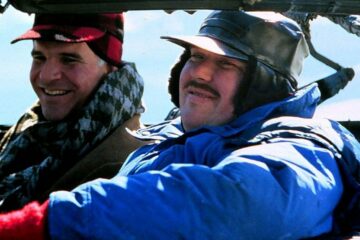