Kino Lorber has released In The Heat of the Night on 4K. This release is a must own for film historians and fans of Sidney Poitier.

Looking back at my movie watching favorites that still resonate with me today. It’s my favorite Poitier film. I love his other work, but this odd my favorite. I can’t think of another actor playing Tibbs.

The picture quality looks the best that I’ve seen, which is to be expected. Kino Lorber does a fantastic job with all of their releases 0.

Synopsis:
This masterpiece from director Norman Jewison (The Thomas Crown Affair) is one of the most radical and acclaimed movies of its generation. Rod Steiger (A Fistful of Dynamite) gives an Oscar-winning performance as a sheriff from small-town Mississippi who finds himself in an uneasy alliance with a black homicide detective from Philadelphia—strikingly portrayed by Sidney Poitier (Lilies of the Field). In the course of investigating the crime, the two strong-willed men must reconcile their inherent prejudice towards each other. The final result is justice—and an unlikely but touching mutual respect. Supporting performances by Warren Oates (Bring Me the Head of Alfredo Garcia) and Lee Grant (The Landlord), an evocative score by Quincy Jones (The Getaway) and vivid cinematography by Haskell Wexler (The Conversation) all add to the film’s authentic aura of a hot summer evening in the Deep South. Winner of five Academy Awards including Best Picture for Walter Mirisch (The Great Escape), Best Adapted Screenplay for Stirling Silliphant (Charly) and Best Editing for Hal Ashby (The Cincinnati Kid), In the Heat of the Night is a blistering commentary on race relations and a landmark in entertainment. 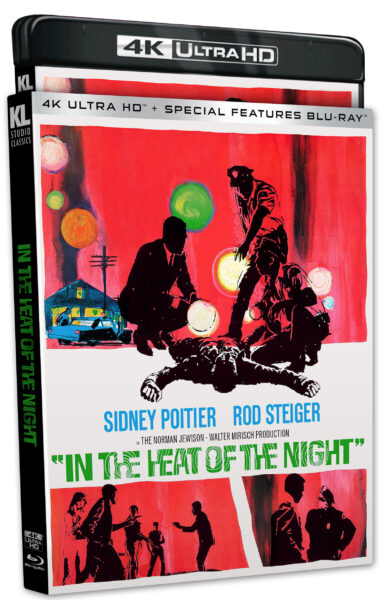 Bonus Features:
Disc 1 (4KUHD): NEW Audio Commentary by Film Historians Steve Mitchell and Nathaniel Thompson with Robert Mirisch (Nephew of Walter Mirisch, and Son of the Mirisch Company Founder Harold Mirisch) | Audio Commentary by Director Norman Jewison, Cinematographer Haskell Wexler and Actors Rod Steiger and Lee Grant | 5.1 Surround & Original 2.0 Mono | Optional English Subtitles | Triple-Layer UHD100 Disc / Disc 2 (BLU-RAY): THEY CALL ME MISTER TIBBS! (1970) – The sequel to In the Heat of the Night, back in San Francisco, a high-priced call girl is murdered and Lieutenant Virgil Tibbs (Poitier) is on the case. Co-Starring Martin Landau and Barbara McNair and directed by Gordon Douglas. | THE ORGANIZATION (1971) – In this Tibbs/Poitier finale, Lieutenant Virgil Tibbs (Poitier) helps a group of idealistic vigilantes expose a drug ring controlled by powerful businessmen. Co-Starring Barbara McNair and Gerald S. O’Loughlin and directed by Don Medford. | Turning Up the Heat: Movie Making in the 60’s – 2008 Featurette (21:10) | The Slap Heard Around the World – 2008 Featurette (7:25) | Quincy Jones: Breaking New Sound – 2008 Featurette (13:02) | Theatrical Trailers for IN THE HEAT OF THE NIGHT, THEY CALL ME MISTER TIBBS! and THE ORGANIZATION