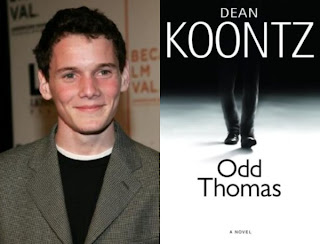 Anton Yelchin (STAR TREK, TERMINATOR SALVATION, ALPHA DOG) has been cast in the lead role in the big-screen  adaptation of the Dean Koontz novel ODD THOMAS. He’s a very talented actor and now I’m officially excited for this movie.
I was excited at least until I found out who was directing the film. STYD reports that Stephen Sommmers (G.I. JOE) is set to helm the project. Sommers did a horrible job directing that film, but what can fans expect from someone who brought us the first two MUMMY movies and VAN HELSING.
Sommers made the following statement:

As soon as I read the book I felt compelled to turn it into a movie. It’s a fantastic love affair between these two wonderful characters.
The story combines action with heart, laughs and scares. It felt right to be doing this independently and I’m excited to take this to the market.

The supernatural mystery focuses on a character named Odd Thomas (Yelchin), who narrates the story like a film noir. The character lacks ambition, and works as a fry cook in California, but has the gift of seeing and communicating with ghosts.
I have never read the books so I don’t have pre-established expectations. I guess every director needs to be given another chance, maybe this will be Sommers’ breakout film. I am hopeful now that Yelchin has been cast and am interested to see who else get’s cast. Yelchin will next be seen in FRIGHT NIGHT, which I am super excited for. Sommers is currently in production on WHEN WORLDS COLLIDE.
What are your thoughts on Yelchin being cast in the film? Share your thoughts on Sommers’ involvement?
Check out the description of the first book

“The dead don’t talk. I don’t know why.” But they do try to communicate, with a short-order cook in a small desert town serving as their reluctant confidant. Odd Thomas thinks of himself as an ordinary guy, if possessed of a certain measure of talent at the Pico Mundo Grill and rapturously in love with the most beautiful girl in the world, Stormy Llewellyn. Maybe he has a gift, maybe it’s a curse, Odd has never been sure, but he tries to do his best by the silent souls who seek him out. Sometimes they want justice, and Odd’s otherworldly tips to Pico Mundo’s sympathetic police chief, Wyatt Porter, can solve a crime. Occasionally they can prevent one. But this time it’s different.
A mysterious man comes to town with a voracious appetite, a filing cabinet stuffed with information on the world’s worst killers, and a pack of hyena-like shades following him wherever he goes. Who the man is and what he wants, not even Odd’s deceased informants can tell him. His most ominous clue is a page ripped from a day-by-day calendar for August 15.
Today is August 14.

In less than twenty-four hours, Pico Mundo will awaken to a day of catastrophe. As evil coils under the searing desert sun, Odd travels through the shifting prisms of his world, struggling to avert a looming cataclysm with the aid of his soul mate and an unlikely community of allies that includes the King of Rock ‘n’ Roll. His account of two shattering days when past and present, fate and destiny converge is the stuff of our worst nightmares—and a testament by which to live: sanely if not safely, with courage, humor, and a full heart that even in the darkness must persevere.

No G.I. JOE 2 For Stephen Sommers