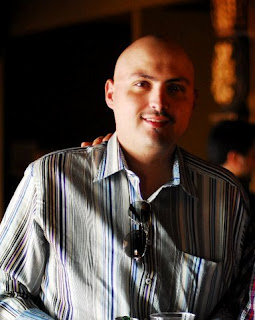 I had the chance to interview director Pablo Pappano recently about his career and his film Clickin’ For Love. Keep reading to see my thoughts on the documentary and to read my interview.

Clickin’ for Love is a “light-hearted documentary exploring the modern world of online dating. Online dating veterans share their stories of searching for casual encounters, soul mates, and everything in between.”


The film takes you inside the minds of those who have used and been used by online dating sites telling it’s story in a fun and real manner without force feeding you it’s agenda. Audiences will be able to surely relate to the people interviewed in the film. My wife and I met online, so we had no problem relating to the film.


Clickin’ for Love is a fun and one that will easily lift your spirits. I would eve be willing to say that this is the perfect choice to watch this Valentines Day!


Now onto the interview…


How did you first get started int he industry?

I went to film school at Loyola Marymount in LA. Through school I was able to take internship classes and make industry contacts through internships and classmates.

You starred in Creepshow III. Were you a fan of the original two films?

I have a couple of cameos in Creepshow III. I play a dead body in the segment the Call Girl. My parents are the other two dead bodies. I also wrote that segment for the film. I am a big fan of Creepshow 1 and 2 and I am a big fan of horror films. Creepshow III was a lot lower budgeted film then its predecessors…it turned out okay. As a writer you don’t have a lot of control over performances and camera positions… but they were faithful to the script I wrote. It was good opportunity for me to earn a writing credit straight out of film school.

You got the chance to work as a crew member on LolliLove with Jenna Fischer and James Gunn. Tell me a bit about what the experience was like on set.

A friend of mine knew Lloyd Kaufman from Troma. Lloyd was shooting a bunch of interviews with filmmakers he knew in LA for the dvd based on his book Direct Your Own Damn Movie. One of the interviews we did was with Jenna Fischer and James Gunn. We also helped them shoot their scenes for that day. It seemed like a pretty low -budget film. They were shooting on DV and using natural light and shooting at locations without permits. James and Jenna were both really nice…it was right before the American version of The Office was going to start up on TV here. They bought us pizza and talked with us about filmmaking. Lollilove seemed to be this fun project they were shooting on the side with their friends. One of their friends who helped out was in Tromeo and Juliet which was a film James wrote for Troma. My friend Micah and I were big fans of Tromeo so it was cool to meet James and his friend (can’t remember his name I think Steve something). I think James had just written Dawn of the Dead and he talked about the next film he was going to do, Slither. If you watch the Direct Your Own Damn movie dvd the interview with Jenna is the one we shot. And the footage with Lloyd Kaufman dressed as a priest and acting with Jenna and James were the scenes we helped film.

Where did the idea for Clickin’ for Love come from?

I have been using internet dating for years and had lots of funny stories. Some of my friends were using it too and they also had funny stories. So I had this idea to do something pretty low-budget where we would sit around and drink some beers and just talk about our stories. When I got around to actually making the movie some of my friends didn’t want to be interviewed or claimed they couldn’t remember all of these crazy dating stories they told me. I got a little depressed and then one day I thought about posting ads on Craigslist to find people to talk about their experiences with online dating. I never saw any other films getting made about the subject. From my own experiences I knew their had to be other people that also had unique dating experiences.

Tell me a bit about the production process for the film. How were you able to find people to take part in the documentary?

So what we did was respond to the people who replied to the Craigslist ads. I would say about one out of ten people would agree to be interviewed. I did a bunch of ads until I found enough people. Once we found everybody we setup a weekend where we shot a majority of the interviews. I shot Audrey’s interview first because of her availability. Once I had all of the interview I began to watch it all and take notes. I was having trouble eliminating things so I knew I needed to find an editor. I found the editor Vance Crofoot through a friend. I had a little over 20 hours of footage to shape into an hour and half film. The neat thing about the editing process was that I was able to shoot additional interviews because people had new developments in their lives like Marty and Colleen. Or the speech Andy gives at the beginning of the film. I had contacted him and he told me has was going to talk about internet dating for his Toast Masters speech. I also shot a lot of the B-roll (reenactments) footage during the editing. The editing process took a year and a half. A lot of the people were very helpful and would respond to my calls to shoot new stuff like Marty, Judy, Colleen and Andy.

What other projects do you currently have in the works?

Right now I am really focusing on getting Clickin’ For Love into more film festivals. We were picked as one of the Best of the Fest Films at the Temecula Valley International Film and Music Festival. I am learning that like internet dating, the world of film festivals is a numbers games with lots of rejection. I really want to give Clickin’ For Love a fair chance before I move on to another project and get it in front of more audiences. The film gets a great reaction from audiences. Internet dating appeals to younger people and seniors…I tell people if you want to try internet dating see the film because you’ll get an idea of what you’re in for. If you have or are using internet dating you’ll relate to the peoples experiences in the film.

Please check out the films website www.clickinforlove.com where you can order the film on DVD and check out trailers and I write blogs. The film will also be available for digital download and rental through amazon.com. Please become a fan of our facebook page www.facebook.com/clickn4luv
If you want to see some of my other films for free check out www.pablopappano.com