The Ultimate Playlist of Noise is now streaming on Hulu, in case you haven’t seen the film, it follows Marcus (Keean Johnson), an audio-obsessed high school senior, upon learning he must undergo brain surgery that will render him deaf. He then decides to seize control of his fate by recording the Ultimate Playlist of Noise. Since music plays such an important part in the film, we decided to speak with the film’s director, Bennett Lasseter, and composer, Erick Schroder, and find out about their creative process working together and how the scoring components were decided on for the film. Read the exclusive interview here:

-When did you come on to the project?

Erick Schroder: I came on board in March of last year. They had already filmed but ended up needing a few pick-ups. With the pandemic, that got pushed back to around August or so. Ultimate Playlist was one of the first films to get back up and going after filming was on hold for a while.

-What were your early talks with the director Bennett Lasseter like 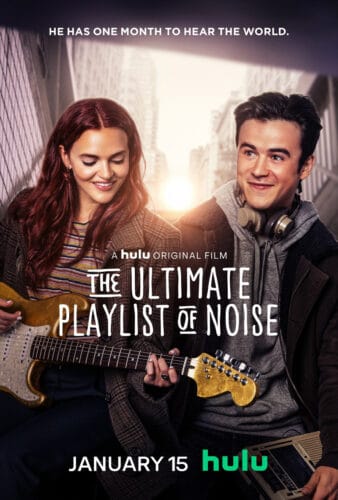 ES: Ultimate Playlist is a pretty song-heavy film. So one of the biggest things we were trying to figure out was how to have the songs really stick out as their own entity, and not be overshadowed by the score elements. It was important to both of us that the score function wrap everything together. We wanted to find a way to weave in and out of the scenes and bring everything together, without it being too forceful of a score, so we talked a lot about what that balance looked, felt, and sounded like. The score is a bit more intimate in nature. There are times when it gets bigger for the purpose of the scene, but overall, there is a sense of intimacy throughout the score that we were trying to achieve.

-Your first track of the film is when Marcus is talking about the accident with his brother. Were there sound design elements in that sequence too, with the firetrucks, or was that all you?

ES: That scene definitely included sound design, and the design helped influence what I came up with for that cue. Hearing the siren of the firetruck and working with the emotion within that scene, I wanted to include some synthetic elements that mimicked the wail of the siren.

-Were there any tracks you scored that didn’t make it in the final cut? If so, what scenes were they in?

ES: Yes, there was a scene with Wendy, Marcus, and her ex-boyfriend that took place right before Wendy and Marcus arrive in New York. The whole team really liked it, but the whole scene actually ended up getting cut, for the sake of time. It was a bummer because the scene gave us the opportunity to learn more about Wendy’s ex-boyfriend and dig a little more into their backstory.

-The final sequence is pretty moving when everyone is listing to the playlist and there is the piano score playing in the background. When you really want to tear on peoples’ heartstrings, have you found that piano is most effective?

ES: I don’t know that I could unequivocally say that piano is the slam-dunk instrument to evoke those heartstring emotions. In general, I think there are a variety of instruments out there that can achieve very emotional responses and have used others, but I do think I have a personal inclination towards the piano and will use that as a starting point very often.

-Since this is such a powerful scene, did you score this sequence

ES: Yes, that scene was scored last. It was a really tough scene because there was a variety of things going on. There are a lot of pieces playing out all out once and it was critical to making sure the score supported all of those elements. Among other layers in the cue, I really wanted to be sure the melodic material from Marcus and Wendy’s earlier moments in the film weaved in to tie all the themes together. While I don’t think that is the most noticeable part of the cue, to me, it helped provide some connection to that experience. That was definitely a hard scene because I didn’t want it to be overly dramatic. It took a while to find just the right tone, but I think we got there in a way that supports the scene really well.

-Best part of collaborating with Bennett?

ES: The Ultimate Playlist of Noise is not the first time Bennett and I have worked together and each time I have worked with him, I have valued his openness to hearing all ideas. There are no wrong ideas; there are some that aren’t the most ideal maybe, but sometimes we need the opportunity to try a few things on for size with the scenes to really get to what is best. Bennett really provided me the space to experiment and provided solid input back on cues and different approaches. It’s great to collaborate with someone who is so open and welcoming in that respect.

-What was it about Erick’s music, that intrigued you enough to have him score your film?

Bennett Lasseter: Erick and I worked together on one of my thesis films back at AFI. It was set in an Irish Pub, so we had a lot of fun composing traditional Irish session music. Once I started post-production on this film, the producers and I assembled a shortlist of composers we thought would fit well. I put Erick’s name on the list because we worked so well together back on my short. We then asked the potential composers to do a spec piece for the Bridge Scene in the film. Some pieces came in and missed the mark completely, some came in and really surprised us, but the piece that Erick wrote showed us exactly the tone we were looking for. It had a piano and electric guitar acting as two voices as the two characters opened up to each other. The piece was perfect. The editor and I showed the scene with his cue and there was no question, it had to be Erick.

-Do you have a favorite scene, musically?

BL: My favorite scene is the Bridge Scene I mentioned before. It worked in so many ways. It truly made you feel close to the characters and elevated the scene to a deeply emotional level. But I already covered that one, so my second favorite would have to be the scene where Marcus listens to Wendy’s apology tape. The music takes the back and forth of that scene and helps it flow as if Wendy is talking directly to Marcus. It gives us a sense of the fun adventure they had before New York City and allows us to feel a sense of closure and forgiveness along with Marcus. It is a really kind and sensitive piece of music to help their relationship heal.

-How involved were you with the scoring process? Did you have a clear idea of what you wanted the score to sound like from the very beginning of production?

BL: I should mention, I am not the most musically inclined person in the room. I have tried to learn musical instruments, and I am okay at some of them. I am a director who can speak to the emotionality I am looking to underline in the scenes, and I really like to give the composer room to run with the ideas. Anyway, when Erick came on we reviewed the film and discussed different cues; where the score would land, where needle drops were placed. And we covered the main emotional focal points of each score cue. We knew we wanted the score to have reduced quality. Adding large strings sections and brass seemed too grandiose and, at times, too sappy for the film. Plus, the story features Wendy and Marcus’s brother who play guitar, so we had to make the guitar a strong centerpiece in the score. Erick found a great way to work in piano with some synthesizers here and there to round it out. After that spotting session, the pandemic hit, and everything shut down. So Erick and I stayed in touch from March through August. The score was just about the only thing we could work on. He would send pieces and I would send back notes, or we would review against the cut with Robin, our editor when she came back on. Despite how rough quarantine and everything has been, it actually allowed a lot of time for us to work on the different cues so they could fit just right.

-Did you know the film was always going to be on Hulu or did that happen after it was already shot?

BL: Well, when Jeremy Garelick first agreed to pick the project up under American High, Hulu hadn’t entered the picture. It was just LD Entertainment. But our film was postponed in fall of 2018, and from January of 2019 to about May that year, Hulu and American High were working out a deal. So once we started production in Fall of 2019, it was definite that Ultimate Playlist would be streaming on Hulu. It was a blessing to have distribution on such a wide-reaching streaming platform, which guaranteed viewers would be able to see it from the safety of their homes.

-What has been your favorite comment from reviewers about the film?

BL: To be honest, I haven’t read many reviews. It was nerve-wracking to have all the articles coming in talking about my feature directorial debut. To protect my sanity, I had my wife read them and go over the bullet points of the reviews. Our release timing was a bit unfortunate because we came out about a month after Sound of Metal, which most critics would just make the comparison and not go too much deeper into Ultimate Playlist. I think my favorite review I received was actually from one of my friends from back when I worked at the Jungle Cruise in Disneyland. She sent me a picture of herself after watching the movie with tears streaming down her cheeks, saying that she loved it. I apologized for making her cry, but she said it was worth it because she enjoyed it so much.

IN THE EARTH Movie Review