Action films with an 80s/90s vibe are making a comeback thanks to Saban Films, whose latest feature, Last Man Down, is now available on digital and on demand. Last Man Down is a thrill ride that brings all the classic elements you would hope to see in this genre, to the forefront. One of those elements being the film’s score by Alexander Arntzen, which never misses a beat. The music in action films is not always talked about at great length, so we decided to speak with Alexander below and get a first-hand account about what went in to the film’s music.

You can listen to Alexander’s score here: https://music.apple.com/us/album/last-man-down-original-motion-picture-soundtrack/1586560269?at=11l9m8&uo=4&app=itunes

-Can you talk about how you first heard about Last Man Down?

AA: I saw it on IMDb, read the synopsis, and was intrigued by it and wanted to learn more and see if I might be the right fit for it. Reached out to Fansu Njie, and after a few back and forth emails had the opportunity to score a few scenes as a demo. Fortunately, spoiler alert, I got the gig!

–Where did you get your inspiration for the score?

AA: I think the inspiration came rather naturally. The way the film was shot so cinematically and how the actors portrayed themselves in such classic action movie personas, it was easy to create a big sweeping score to highlight the overarching feel of the film. Fansu did want the Score to have a bit of a darker Horror vibe to it, which I was happy to oblige!

–As tension builds in the opening scene, so does your score. How do you know which level to go to, without overpowering the story?

AA: Thanks for noticing! I think it’s all about pacing. You have to figure out how to slowly dole out the next rise as the stakes increase over the scene. Starting out without any rhythm gives you wiggle room in the beginning. Then once the ticking percussion starts, that naturally clues you in that things are taking shape and going somewhere. Finally the building of the orchestra with the theme not only getting louder, but adding instruments like the Brass and harmonies and string ostinatos along the way, building to the climax is an effective way to slowly dial up the tension to get it to the highest stakes possible by the end. 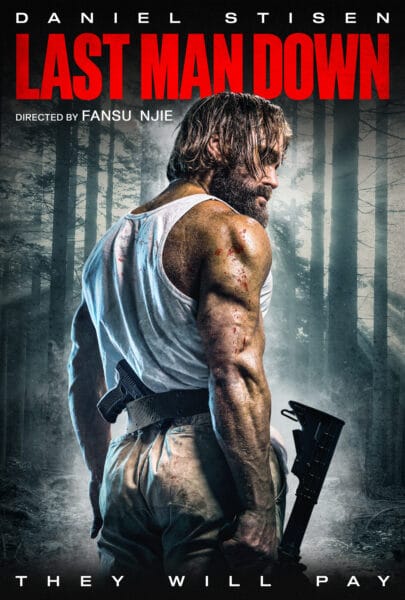 –Many people have said that Last Man Down looks like an action movie straight out of the 80s. Did you craft a score to match this vibe?

AA: The Score certainly has very classic “Good Guy” & “Bad Guy” themes, but I tried for the most part to keep the sound of the Score modern throughout. Once in a while, there are some synths that could give off a subtle throwback vibe. However, despite the film having that classic 80s aura around it, me and Fansu knew we wanted to keep the Score in the present day so as to keep it authentic and not just a gimmick to the films that we hopefully are honored to be emulating in many other ways.

–The Last Man Down premise revolves around a pandemic. Did writer/director, Fansu Njie, write this story before the Covid pandemic happened or was that just coincidence?

AA: This whole story was created during the pandemic. Fansu& Daniel (the Star) were going to be making other projects before the pandemic hit. Once it did come to pass, they smartly switched gears and decided to lean into the situation at hand and make the best of it. I think their quick thinking paid off big time!

-You incorporated a cocking of a shotgun into your score. At what scenes would we be able to hear this?

AA: Yes I did! You can hear it in 3 scenes: The first is when John Wood is setting up his cabin and the surrounding area for battle. The 2nd is when he and Maria are getting their weapons ready, and the 3rd is during the End Credits. I didn’t want to push that sound too much, but I found it to be a cool element to add in those moments to give it something extra special and unique to this Score.

–The Last Man Down score is very grand; did you get to use an orchestra for the film?

AA: Thank you so much! That was certainly what I was trying for. Unfortunately, there was neither the time nor the budget to hire an orchestra, so everything you hear in the Score is 100% from my sample libraries, careful sequencing & mixing, and plug-in processors to make the sound of the Score truly powerful and grand. I pride myself on being able to make a digital score sound as much like the real deal as possible.

-Has anyone mentioned to you that the score for the sounds very patriotic? Was that on purpose?

AA: No you are the first! But I have thought that is does indeed for a while now. I think with John Wood’s main theme, I wanted to create a classic heroic sounding melody similar to the classic American military movies I used to see as a kid. I strived to make sure to juxtapose the character’s inner goodness, despite the violence he enacts, against the far more evil theme of Commander Stone, which is devoid of any empathy.

–There is a sequel that is hinted to. If you were to score the sequel, are there techniques or sounds you didn’t get to use in this film, that you would in the next?

AA: Indeed there is! I absolutely would. I think the most exciting prospect of a sequel would be how I could update the themes I have already created and add new layers to them to evolve the sound for whatever the plot could be in the future. Certainly, trying to make the villain theme even more diabolical would be one of my #1 most interesting challenges so as to not just repeat the same music again with the same arrangements. Using Choir certainly seems like one thing that could take the Score to the next even more epic level than it already is!

–When you are looking for projects to score, what stands out most to you?

AA: I think when looking for projects to score, the synopsis is always an important thing that needs to captivate me when I read it right off the bat. Also, researching the filmmaker is key. You can have a great idea, but if it isn’t executed and shot well, it won’t matter in the end. Plus, would the idea itself and the way the filmmaker makes films be conducive to me writing a truly original Score. All of those things are very essential when deciding to reach out to a project, and officially signing on to Score it if everything lines up just right.