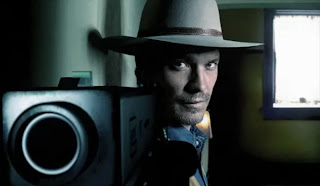 I had the opportunity to take part in a Q&A with Timothy Olyphant about the second season of Justified, which airs February 8 at 12 PM PT/3 PM ET on FX.

What keeps challenging you about playing this character?

I’m just trying to figure out what to do next, but he seems like he’s got a — as usual — he’s got a lot problems.

Well, you know, it’s really more about – the character is just a joy to play. It’s more just about the beast of – you know, of television production and just trying to keep your head above water and, you know, stay in front of it, and just remember how much fun it is.

Which actors from early westerns or cop shows have influenced your take on Raylan Givens?

No, I really didn’t look past the – you know, the books. After that, I tend to draw inspiration from whatever just kind of floats my boat for the moment. But, I really spend a lot of time with the source material and I read those books constantly, and spent time with Elmore. And then, it was conversations with Graham, you know? And it was some conversations with Marshals; things like that.

Where is the show filmed and what goes into making the show authentic?

A great deal of it we film out in Santa Clarita, which in the summertime you just head straight towards the sun…

Well, I – that – you know, the – our producers and locations managers are doing a hell of a job. They’ve got their work cut out for them. And then, I think at the end of the day it comes down to the riding and the funny voices, you know?

Our writers had a chance over the break to – they all went down there as a group. A lot of characters you’ll see this season are based on people they’ve met. And so, I’m thrilled that, you know, it feels like we’re capturing it because Lord knows we’re given it the old college try.

How does it feel playing a modern day cowboy every week?

I appreciate that. Thank you. I’m not – very kind words. I can’t take full credit for it. I’m really just, you know, saying the words and trying to kind of bring it to life.

The – you know, it’s all cowboys and Indians when it comes down to it. You know, it’s kind of the fun of the job, it’s child’s play, and I get a great deal of fulfillment out it. It just so happens every now and then you actually put on an actual cowboy hat and it kind of brings it all home, but you know this one’s fun. You know, it’s always fun to – you know, cops and robbers and in this case it’s kind of more like cops and hillbillies, and this one’s a blast.

You know, it’s such a – you know, the tone of the show, the tone – you know, Elmore’s cool, you know, and Elmore’s funny. And it’s a kick to be able to play what, I guess they call a drama, but day in and day out I think we’re making a comedy, so it’s a lot of fun.

Do you enjoy building character over TV or creating a character in a shorter amount of time when working on a film.?

Well, the fun of it is – you know, really is – you know, I – in a film you more or less know the beginning, middle, or an end and you might have some wiggle room in there, but this really is a journey, you know, and I’ve been very fortunate to be kind of allowed in on a part of that process. So, that is one of the real challenge here for me that I’ve really enjoyed, which is – you know, it’s – I don’t think of it as building a character. I just think of it, you know, we’re just telling a story and I don’t know how it’s going to end, and that’s kind of the fun of it.

But for me, you know, at the end of the day this – it – the same things apply. You know, I’m still trying to scene to scene figure out what it is I’m doing and basic rules still apply. And you’re just – I think, you know, the tremendous upside here is that it’s such a great character, and it’s really tough to get your hands on a great character.

Season 2 introduces fans to Mags Bennett and her sons who are moving into fill the criminal gap left after last season’s finale. Mags and Raylan have a prior history together. How does their relationship impact this season and what is it like to work with Margo Martindale?

The whole bunch of them are just fantastic, both the characters and the actors playing them. Margo’s just the real deal. I just – she should be picking out dresses, you know, as far as I’m concerned, and it’s just a – it’s – I don’t know what else is on TV, but I’m pretty sure that’s something special. And it’s a pleasure to work with her and Jeremy and Joe and, you know, all those guys, Bradley playing Coover. They’re just great, and I just thought we were onto something special.

You know, the inspiration for the character came from Elmore who has written some stories about Raylan and he had a character in one of his books that was a man, I think he was calling him Pervis Crowe, connected to the Crowe family. And Graham wanted to make the character a woman and Margo is just like such a fantastic choice, you know? So, it feels like something that you just don’t see.

And as far as the families and the history, I mean that’s something that, you know, Graham and I were both really interested in exploring this year in that sort of Hatfield-McCoy kind of culture and styles. And I think that you know what’s – it’s been really nice, you know, it’s what was alive in Elmore’s original story – short story with Boyd, and we tried to kind of keep that alive, and also kind of deepen it.

You know, it’s really nice throughout the season we keep kind of deepening that history, kind of keep peeling back the layers. You find out more and more as we go, little hints that we leave as we tell the – as the story goes we kind of come back around and get a little deeper. And it’s just the world we created this year, I think, is just really rich.

Margo Martindale’s character, Mags Bennett, is  basically the female version of Tony Soprano and Paula Dean. It seems as though Raylan and Mags have a love-hate relationship, but that she she cares about Raylan. She cares about you. She’s proud of you. Am I wrong?

No, I think you’re onto something. I mean, I – you know, Elmore’s world is always, you know, less about good guys and bad guys as – you know, people who respect each other and people who don’t, you know? It comes down to who’s cool and who’s an asshole. And I think that division is often more important than who’s breaking the law and who’s trying to keep it.

And you know I think that it’s always a fun choice. You know, it’s always a interesting dilemma and situation when you genuinely like the person, respect the person, but are at odds, and plus she’s just so fun. I don’t know if it was a choice so much as just a reaction. As I was working with her, I just find myself so fond of her and her work and, you know, you’re like, “Well, I guess Raylan likes her.”