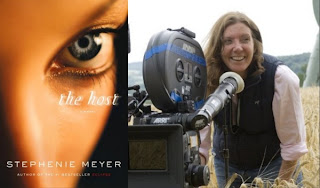 Stephanie Meyer fans get ready to be excited! Susanna White has been hired to direct the feature adaptation of Meyer’s The Host. Instead of vampires, this book has alien parasites in it called the Souls who take over Earth by inhabiting human bodies and what happens when one human’s brain fights back.
According to Variety, This long gestating project has script written by Andrew Niccol (Gattaca, The Truman Show). White directed this year’s Nanny McPhee Returns as well as several episodes of David Simon’s HBO series Generation Kill.
Twilight falls into the category of “Young Adult” and The Host is considered “Adult” it’s much more mature subject matter. Check out the Publisher’s Weekly review from the Amazon page:

In this tantalizing SF thriller, planet-hopping parasites are inserting their silvery centipede selves into human brains, curing cancer, eliminating war and turning Earth into paradise. But some people want Earth back, warts and all, especially Melanie Stryder, who refuses to surrender, even after being captured in Chicago and becoming a host for a soul called Wanderer. Melanie uses her surviving brain cells to persuade Wanderer to help search for her loved ones in the Arizona desert. When the pair find Melanie’s brother and her boyfriend in a hidden rebel cell led by her uncle, Wanderer is at first hated. Once the rebels accept Wanderer, whom they dub Wanda, Wanda’s whole perspective on humanity changes. While the straightforward narrative is short on detail about the invasion and its stunning aftermath, it shines with romantic intrigue, especially when a love triangle (or quadrangle?!) develops for Wanda/Melanie.

I love Gattaca and The Truman Show so I’m very excited about this project. I actually am a huge fan of the Twilight books and films, so I am interested in seeing this make it to the big screen.
What are your thoughts on this news?

THE HOST – New Trailer for the Futuristic Love Story