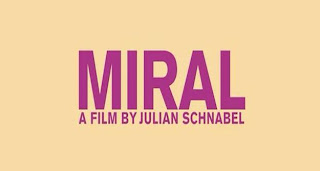 Here is the first trailer for Julian Schnabel‘s Miral.

The film stars Freida Pinto (Slumdog Millionaire) and takes place over five decades during the Israeli-Palestinian conflict. Pinto plays a young woman who falls for a political activist (Omar Metwally, Munich) and becomes involved in the Palestine liberation movement.

Miral is based on a semi-autobiographical novel of the same title by Palestinian journalist Rula Jebreal. The film also stars Hiam Abbas (The Visitor) and Yasmine Al Masri (Caramel) star as Miral’s teacher and a prisoner, respectively. Vanessa Redgrave and Willem Dafoe appear in small roles.
Official synopsis:

From Julian Schnabel, Academy Award© nominated director of The Diving Bell and the Butterfly, Before Night Falls and Basquiat, comes Miral, the story of four women whose lives intertwine in the starkly human search for justice, hope and reconciliation amid a world overshadowed by conflict, rage and war. The story begins in war-torn Jerusalem in 1948 when Hind Husseini (HIAM ABBASS, The Visitor, Amreeka) opens an orphanage for refugee children that quickly becomes home to 2000 orphans. One of the children is seventeen year old Miral (FREIDA PINTO, Slumdog Millionaire) who arrived at the orphanage 10 years earlier, following her mother’s tragic death. On the cusp of the Intifada resistance, Miral is assigned to teach at a refugee camp where she falls for a fervent political activist, Hani (OMAR METWALLY, Munich, Rendition) and finds herself in a personal battle that mirrors the greater dilemma around her: to fight like those before her or follow Mama Hind’s defiant belief that education will pave a road to peace.

It was originally scheduled to open in the U.S. last December, but has been rescheduled for a March 25, 2011 release date. Check out the trailer below and let us know your thoughts.

Deafheaven's "Violet" from their new album Roads to Judah