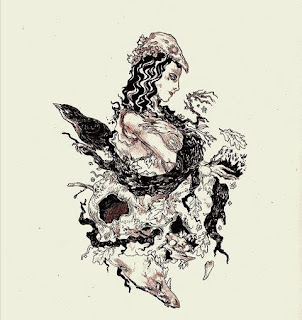 Deafheaven recently announced that their debut album, Roads to Judah, will be made available April 26, 2011 on Deathwish Inc.The album is a landmark effort for Deafheaven and a dizzying hybrid of shoe-gaze shimmer, hardcore vulnerability and black metal intensity. Check out a sneak peek of the album opener, “Violet” streaming courtesy of BrooklynVegan.com along with a brand new interview with vocalist George Clarke.

From the opening drone of Deafheaven’s new album, it’s as if the listener is peering through a dream into the private world. Layers and layers of instrumentation build, tangle and swirl before the real onslaught begins. A ferocious drum fill then thrusts us from the serene into a free fall, as if the ground below suddenly gave way. From there we plummet through one awe inducing sonic fog into the next, blurring the traditional lines of song. Hyper blasts of speed rage and pulse while lush guitars bellow, roar and whine with unorthodox melody. And just as we feel we’ve departed from reality from the aural overload, tortured vocals cry out from afar.

Though the title could suggest something otherworldly, the “Judah” referenced in Roads to Judah is in fact the “N Judah” train, the busiest line of the San Francisco transit system. A relatable landmark to compliment the haunting ambiguity that surrounds Deafheaven and the music that they collectively create. On it, much of the lyrical writing and personal reflection for this album took place. With that said, Roads to Judah isn’t Heavy Metal role play, but a beautifully blackened artistic exploration of the issues and self loathing that can cloud every day life. A stunning a achievement emotionally and musically that will surely shape aggressive music for years to come.

Video: Peter Bjorn and John performing tracks off of their album Gimme Some at Rolling Stone