Available September 6, 2022 for the first time on 4K UHD, Scream Factory’s release of The Funhouse Collector’s Edition is a two disc set that features a brand-new 4K scan of the film on both UHD and Blu-ray discs, as well as a variety of bonus features, including new interviews with actor Miles Chapin, actor Largo Woodruff, and actor Wayne Doba, a new interview with special effects artist Craig Reardon, and much more! Fans can pre-order their copies now by visiting ShoutFactory.com

On her first date with Buzz (Cooper Huckabee, True Blood), Amy (Elizabeth Berridge, Amadeus) disobeys her father and goes to the carnival with Richie (Miles Chapin, Hair) and Liz (Largo Woodruff), but their first date may end up as their last. After witnessing a murder, the four terrified teens are trapped in the maze of the funhouse and stalked by a real monster, a horribly deformed killer who lurks among the freakish exhibits to butcher them one by one. Also stars Sylvia Miles (Midnight Cowboy) and Kevin Conway (in three roles). Featuring special makeup designs by Academy Award®-winner Rick Baker (An American Werewolf In London, Ed Wood). 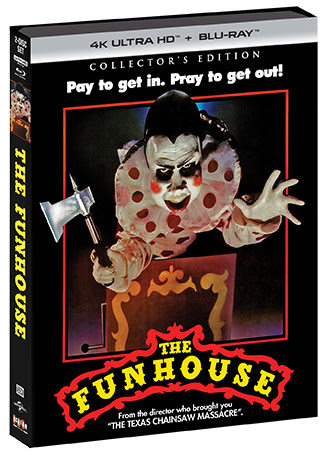